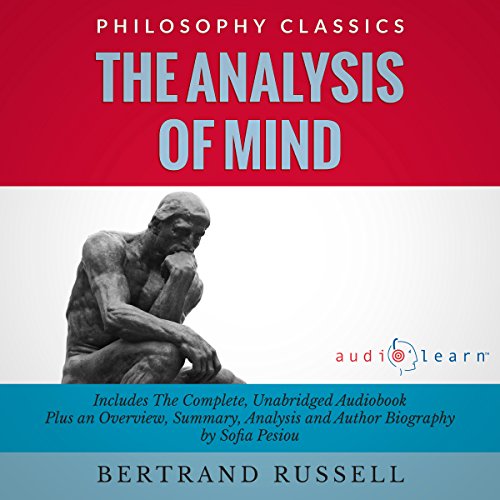 The Analysis of Mind

By: Bertrand Russell,Sofia Pisou
Narrated by: Douglas James
Try for $0.00

The Analysis of the Mind by Bertrand Russell is a collection of lectures the Nobel-awarded philosopher delivered in the 1920s. These 15 lectures have been hailed as milestones in modern psychology as they explore the relation between mind and matter under a completely new scope. Living in the turbulent years after World War I and having been deeply influenced by realists and behaviorists of the early 20th century, Russell attempts to reconcile the paradoxical materialistic view of contemporary psychologists on mind with the anti-materialistic tendency that physicists adopt over matter. In addition, he examines and clarifies all terms and concepts that have long been used by idealists and psychologists lightly and without explicit definition as those of consciousness, sensation, perception, memory, and belief.

As a mathematician, Russell employs the analytical method and tries to disprove scientifically the existence of consciousness, introspection, and everything that constitutes source of knowledge from "the inside" of human brain. He encourages the view that knowledge is largely the result of external observation, though things are not as simplistic as they appear.

Includes: a brief background of the author and the work; overview, synopsis, and analysis; historical context, criticisms, and social impact; chapter-by-chapter summary; the full narration of the text.

This summary includes a synopsis and analysis of every lecture along with comments and notes on the historical context. It is highly recommended to all who are interested in the field of psychology.

What listeners say about The Analysis of Mind

One star for production, Five stars for all else

While the narrator is fabulous (I will seek other books by this narrator) and the book itself is an important and fascinating classic, I will be returning this audiobook and buying either a different audio version of it or else a printed version, if no suitable alternate audio version exists. The problem with this otherwise exceptional audiobook is the use of an invasive "musical" device to separate the various sections, of which there are many.

At each section-change, as I'm drifting off to sleep while listening to this wonderfully-read and brilliantly-written book, I am startled by the harsh sound of a percussion-mallet (probably made of plastic or metal) being moved rapidly, in one stroke, across the metal keys of a xylophone or glockenspiel. (Think the "magical" sound you hear in an animated cartoon movie when a fairy appears or a piece of magic is depicted.)

I have a suggestion for the producers of this audiobook to consider: In the future, if it is deemed important to differentiate one section in a book from another, verbally announce the section, rather than produce a "musical" sound. This sound, in my experience (each to his own, I realize), upon repetition, rapidly becomes obnoxious and completely looses any musical value. which it might have initially had, and sounds out of place.

amazing book from an amazing thinker.

I'm not sure if it was from the reader or the book itself, but there is a good bit of repetition of clauses, sentences, paragraphs and even of entire lectures.

This wasn't really a big deal, but it will lead you to question yourself as to whether or not you have heard something twice.

Besides that, I enjoyed the reader and the book itself.

narrator: multiple repetitions
overall the book is coherent and interesting. the summary should have been in the end not the beginning.

If you could sum up The Analysis of Mind in three words, what would they be?

What was one of the most memorable moments of The Analysis of Mind?

There are no scenes in this work. It is a series of lectures.

Watch at your own peril.

The editing of this performance is horrible. Several sentences are said twice. The last chapter is posted twice in its entirety.

The narration is rather good, but it is difficult to imagine Bertrand Russel with this dialect and it is sometimes difficult to match the words spoken to the dialect.