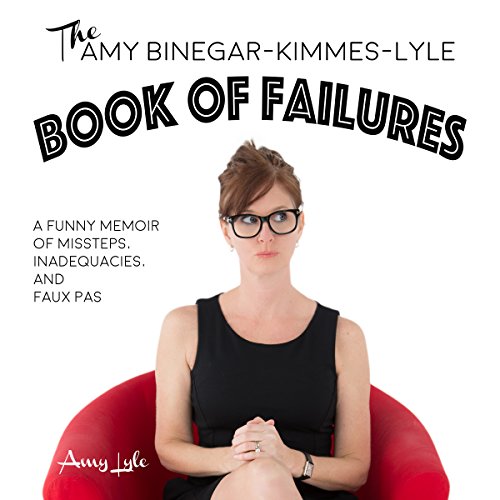 The Amy Binegar-Kimmes-Lyle Book of Failures

The Amy Binegar-Kimmes-Lyle Book of Failures is a funny memoir. If you have ever failed at love or finances, been fired, not fit in, self-diagnosed yourself with disorders and conditions, and/or said "I really need to get my s*** together", this is the book for you.

You may appreciate your own dysfunction a little more as you take a journey through Amy’s debacles, including: “I Was Not Talking to You”, where Amy mistakes a handsome man waving at her as a potential suitor but in reality he was only trying to inform her that her belt was dragging on the freeway, and “In the Neighborhood”, where members of a cult moving in concurred with a suspicious decline in the cat population. You will relish the chapters entitled “Calls from Sharon”, where Amy’s best friend rants about her kids not getting a fair shot because public schools are "so political", as her OB/GYN reported her vagina was "too clean" and how the most eligible bachelor from 1982 married a whore. Enjoy “I’m Going to Kill You”, where Amy compares her lack of sleep from her husband’s snoring to CIA agents extracting secrets from a POW. Feel 20-32 percent better about your own life after reading “Getting Divorced Sucks”, where 911 was called after Amy had an adverse reaction from taking Xanax.

Amy Lyle is a comedienne, screenwriter, and monthly contributor to My Forsyth Magazine.

What made the experience of listening to The Amy Binegar-Kimmes-Lyle Book of Failures the most enjoyable?

This book is pure entertainment—full of giggles and laughs and an escape from the mundane routine of the everyday existence we all suffer. The author has a talent for finding a humorous way to express the things we all sometimes feel but hesitate to say out loud. I am a fan of this lady’s style and sense of humor. I highly recommend this book. I listened to the audio edition and it was very well narrated with a pleasant voice and a smooth pace. Looking forward to more from this author.

I️ I loved listening to this witty compilation of funny stories and failures written by Amy Lyle. The author did a great job weaving together a lifetime of failures and short stories into cohesive chapters throughout this hilarious book. I couldn’t stop listening and laughing all the way through. I’m recommending this book to my husband and friends to listen to during their commute, as it will surely make them look forward to driving for once!

Caution: don’t drink hot drinks when listening to this. This book made me laugh so hard I spit out my coffee! I was having a hard day and this collection of funny stories was just what I needed to make me smile.

I enjoyed this memoir quite a bit. It had me laughing out loud on multiple occasions. I connected with her right away and couldn't stop listening once I had started. I've faced many of the same debacles and issues throughout the years and I found her take to echo my own on many occasions. I'm looking forward to seeing what more this author has to offer in the future. Highly recommend. Definitely worth the listen.

Thank you for making me laugh today

What made the experience of listening to The Amy Binegar-Kimmes-Lyle Book of Failures the most enjoyable?

It's fun to laugh at the mistakes of others.

Anytime Amy Lyle talked about food I laughed a little too hard. I LOVE food too!!

The narrator was really great!

Amy Lyles is not afraid to share her own life missteps, which make her more endearing. Amy is every girl's girlfriend. She is honest, fun, funny, sincere, and smart. Who wouldn't like that combination? She writes for her generation - women who are TRYING to hold it together. If someone IS holding it together, I already don't like them. That's why I like Amy. She is not afraid to take ownership about her inadequacies, which we all have.

What was one of the most memorable moments of The Amy Binegar-Kimmes-Lyle Book of Failures?

The most memorable was the story about her friends writing on the Spirit Rock that students were NOT supposed to write on but the administration turned a blind eye...especially to Seniors, so they did. But then again, they didn't. But still got in trouble for it anyway. Sorta. Love it when he yells, "Get out of my office!"

Have you listened to any of Angela Rose Masi’s other performances before? How does this one compare?

Sorta. I wanted to, but then again, with her short chapters, I wanted to savoy. What does one do about that? OH, I know - ask her to write another book!

Full of laugh out loud stories

Could not stop listening - wanted to find out what hilarious fail was next for this author! My favorite chapter was about Helen where Amy’s husband takes her seriously about adopting a Chinese baby. Another funny chapter was “I Can See Your Buttons” where Amy gains confidence at the gym as men keep checking her out only to look in a mirror and find her nipple had escaped her sports bra! Put this one on your must-read list!

Self deprecating humour at its best.

Yes, because it is light-hearted and makes people feel like they are not alone bumbling through life.

What was one of the most memorable moments of The Amy Binegar-Kimmes-Lyle Book of Failures?

Sharon's phone calls were the highlight for me. Where can I get a friend like Sharon? Anyone?

What about Angela Rose Masi’s performance did you like?

Angela is a genius and she really made this book for me. She is a natural actor and the voices she did for all the different characters were amazing. It was like a very funny friend talking to me in the living room, not robotic at all. She has a lot of talent.

Enjoyed the book and all the little everyday situations we all find ourselves in. It makes you realize you aren't alone.

Couldn't get passed the first chapter for two

It sounded like a robot was reading it. Could not listen any longer than 2 chapters.

Such a fun ride!

OK. We all do dumb things in our lives. Awkward things. Embarrassing things. Things we'd rather forget and certainly don't share. But Amy Binegar-Kimmes-Lyle looks at HER "Failures" though some funny-colored-glasses and shares with us all. You'll find yourself "uh-huhing" in recognition of some painful tales, and laughing out loud hearing some of Amy's private gaffes.

The chapters run the gamut from school days (I'll never forget her fateful high school report and presentation!) through adult experiences like the rocky roads to and through marriage.
This book wasn't just an enjoyable read, but gave me a fresh appreciation of my own blunders - maybe they're pretty funny too!

Which character – as performed by Angela Rose Masi – was your favorite?