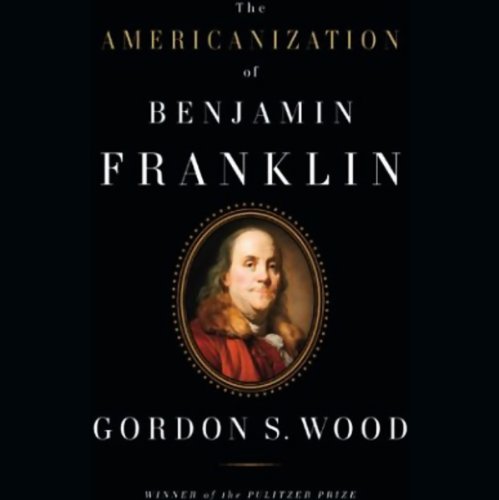 The Americanization of Benjamin Franklin

Central to America's idea of itself is the character of Benjamin Franklin. We all know him, or think we do: In recent works and in our inherited conventional wisdom, he remains fixed in place as a genial polymath and self-improver who was so very American that he is known by us all as the first American.

The problem with this beloved notion of Franklin's quintessential Americanness, Gordon Wood shows us in this marvelous, revelatory book, is that it's simply not true. And it blinds us to the no less admirable or important but far more interesting man Franklin really was and leaves us powerless to make sense of the most crucial events of his life. Indeed, thinking of Franklin as the last American would be less of a hindrance to understanding many crucial aspects of his life: his preoccupation with becoming a gentleman; his longtime loyalty to the Crown and burning ambition to be a player in the British Empire's power structure; the personal character of his conversion to revolutionary; his reasons for writing the Autobiography; his controversies with John and Samuel Adams and with Congress; his love of Europe and conflicted sense of national identity; the fact that his death was greeted by mass mourning in France and widely ignored in America.

The Americanization of Benjamin Franklin is a landmark work, a magnificent fresh vision of Franklin's life and reputation, filled with profound insights into the Revolution and into the emergence of America's idea of itself.

" "A fascinating portrait of Franklin, not only as a forefather but as a man." (Publishers Weekly)
"This superbly written work provides a fresh perspective on a justly admired but enigmatic figure." (Booklist)
"Engaging....A skilled writer with both Pulitzer and Bancroft prizes to his credit, he [Wood] possesses as profound a grasp of the early days of the Republic as anyone currently working." (The New York Times Book Review)

What listeners say about The Americanization of Benjamin Franklin

Where does The Americanization of Benjamin Franklin rank among all the audiobooks you’ve listened to so far?

I've read and listened to this story and I really like it. It is well-titled but I hadn't really thought about the title when I started it. This book tells the story of Franklin transitioning from a proud Englishman to an independent American. He was such an interesting man, although not so wonderful perhaps in the husband/father category. Regardless, one should admire this pivotal figure in American history.

What other book might you compare The Americanization of Benjamin Franklin to and why?

It's very unique. Franklin had so many different interests and he influenced many different areas of his time period. He lived a long life and understood the value of print to promote his many ideas and beliefs.

Have you listened to any of Peter Johnson’s other performances before? How does this one compare?

Not that I can remember.

Not that I can remember. It just made me understand more of the impact he had on the development of our nation.

If I had to choose a favorite historian, it would be Gordon S. Wood. His scholarship is masterful, and he combines it with a lovely literary style that is very accessible to the general reader. This book on Benjamin Franklin - not a complete biography, but rather an exploration of how Franklin came to be the archetypal American - is a wonderful example. Read it to learn how Franklin's thinking about the British empire and and society, as well as the ancient aristocratic denigration of work, evolved into the uniquely American elevation of the "middling" classes that was readily apparent by the time of Alexis de Toqueville.

Franklin Would Have Loved This Book

In far less space than the typical doorstop tome, Wood illuminates Franklin's long professional and intellectual trek to become the most "American" of the founders. Anyone who relies on their high school or college understanding of Franklin will profit from Wood's treatment of a man who was truly a lifelong learner, but one careful never to be too far out in front of what the traffic would bear. Insufficiently appreciated in his time, Franklin turns out to be every bit as much responsible for the success of American independence even if his vision of how to frame the Constitution of the new nation did not emerge as the orthodox view. A great listen.

I have good news and bad news

With this book, you will learn some interesting new things about Ben Franklin. He was driven by a desire to be in the gentleman class and he was very much a British loyalist.
On the downside, the narration is atrocious. If you are an insomniac, this guy will put you to sleep fast!!

This book was well organized, thoughtfully expressed, and engagingly written. I enjoyed this book and highly recommend it.