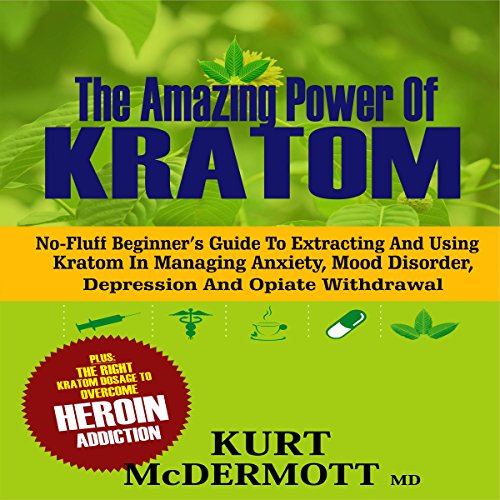 The Amazing Power of Kratom

By: Kurt McDermott
Narrated by: Steven Carl Logan
Try for $0.00

Are you or is anyone close to you addicted to Heroin, prescription painkillers, or any other heavy opioid or opiates, and desire to stop but is scared of the withdrawal effect? Then this book is the right book for you to do just that without having to go through such pain.

According to the CDC, around 90 Americans die from opioid overdoses every day, which is more than the number of people who die from car crashes daily. It is the biggest drug epidemic in America’s history with one of the highest hit states, West Virginia as the epicenter of these opioid-related deaths. Of the 100,000 people living in Huntington and surrounding Cabell County, officials estimate that ten thousand of them are addicted to opioids, like Heroin and pain pills like Hydrocodone and Oxycodone. There have been over 100 deaths so far in Cabell County in 2018 with more than 2,000 cases of overdose reported.

The level of opioid addiction in the United States is beyond anyone’s comprehension and it is affecting everyone in one way or another. The health implication is rapidly increasing and affecting even unborn children. In Huntington county alone, one out of every five babies born has been exposed to drugs before birth. They go through painful withdrawals syndromes from drugs like Heroin, oxy, fentanyl, and other opioid-based substance taken alongside Heroin by their mother during pregnancy. This is so devastating for these babies and most of them go down with neurological symptoms that aren't helped by medicine.

However, these deaths caused by tolerance and the eventual overdose of opioid is what Kratom is successfully addressing. In this book you will learn the following:

What listeners say about The Amazing Power of Kratom

Great story, but I can’t stop hearing your saliva moving around on your tongue! Over sensitive Microphones Are Like 4K Tv. It’s really really bad.

loved it great knowledge about the book and if you want to know how to do it right..