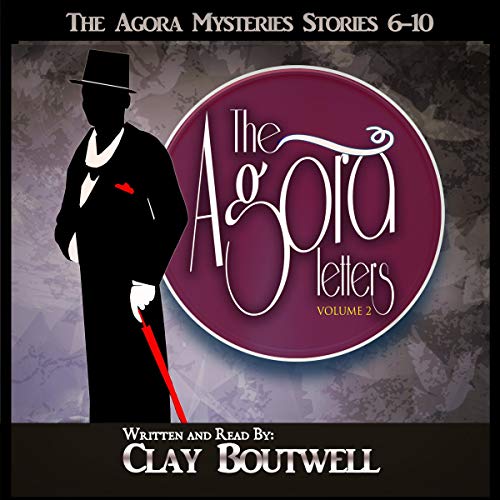 It is 1890. In the twilight of his years, Carl Brooke records his reminiscences as a member of the Agora Society. Each letter describes the society's involvement in solving a crime, often coming to the aid of Captain Barnwell of the Boston police.

Get five complete mysteries in one. This collection includes stories six through 10 in the Agora Mystery series:

Knowledge of prior stories is not necessary to enjoy any of these mysteries in any order.

This charming mystery series is set in 1890 England, but what sets it apart is how it’s told. Each story is told by an old man who is reminiscing on stories from his “hay day” as a young man in the Agora Society. This volume includes 5 stories, and each of them are a stand alone piece, and can be read in any order. In fact, you can dive into any of the stories and not need much background info, because the stories do a great job of setting the scene and filling you in. The narration is very well done, and the charm of it being a period piece story makes it even more wonderful!

First: the stories themselves are beautifully written. Strongly written characters, excellent mysteries and plots. Second: I had no idea that the author was such an amazing narrator! This explains his storytelling skills as a writer!

Murder Most Foul--History and Mystery

This series of five epistolary-style tales, delightfully narrated by the author, is the second half of a group of ten which comprise the entire arc of the Agora Society stories. Each demonstrates different qualities of observation in ferreting out the relevant issues which have created the conundrum at hand. While most of these stand alone (nine and ten are better read together), the overarching context is better served by reading them in order. Set post Civil War, the narration and language by and of the author exemplifies the stiffer proprieties of the times and the more formal style of writing contemporary thereto. (Sorry, it's catching!) Fans of Poe and Doyle should be enthralled!
---
Murder by Monday, Book 6~~In Defense of Dogs
A penitent murderer is being haunted by his past sin; but did he even kill the man he'd shot in self defense?
---
Eggs over Arsenic, Book 7~~The Art Critic
A drawing room whodunnit with a deserving corpse and some pretty seedy suspects.
---
Remember Thy Oath, Book 8~~Pirates!
Legally, duress negates contracts, but pirates don't operate under the law. Can The Agora Society save the day?
---
The Felled Crabapple Tree, Book 9~~Civil War Trauma
A veritable love story, there is still a great deal of historic action and reaction in this tale of a Civil War veteran's changed personality, now known as PTSD. Flawed people still want to appear perfect to their loved ones; but can one live with oneself, knowing one has wronged another? Another quandry to be solved.
---
The Eye of Bennu, Book 10~~Facing His Nemesis
Within the series of 10 stories, most of the previous tales really seem to stand on their own within a greater story arc involving the Agora Society. However, by the time you get to the last two, the interrelatedness becomes compelling and, although you would have a fine fable with just the last chapter, the integration of the whole is worth the effort to read the entire series, or at least stories nine and ten together. I had the benefit of listening to the author read his own words and enact them, using distinct voices for the different characters, with as much skill as a professional voice artist. This episode represents the conclusion and brings history and mystery together, tying off all the disparate threads one didn't realize had been left hanging.

I was offered a copy of this audio book in exchange for an honest review. This is my first book by Clay Boutwell and it won't be my last. As the author and narrator, Clay was able to more accurately capture the characters feelings. The stories themselves were interesting, revolving around Carl Brooke's (the main character) memoirs of his time in the Agora Society and his dealings with the mysterious Drake whose calling card was an origami bird. The last story, dealing with death of Carl's pregnant wife and their daughter, had a different "feel" because it dealt mainly with Carl's need for revenge. I still have mixed feelings about that particular episode but otherwise I thoroughly enjoyed this book. Now to get volume one and learn more about Carl's beginnings. Well done Clay!

Clay Boutwell is a brilliant story teller whose talents as both a writer and a narrator are showcased in this collection of stories about an investigator for the Agora Society.
The stories are well told in a classic Victorian style that hearkens back to the best of Arthur Conan Doyle. The hero, Brooke solves a series of apparently unrelated cases with the help of his friend and colleague Captain Barnwell. There's plenty of action, great attention to detail both in describing the characters and setting and in documenting our hero's painstaking investigative techniques, a brilliant, devious and thoroughly evil mastermind lurking in the background like a haunting refrain in a Hollywood thriller, and the edge-of-your-seat finale is both thrilling and satisfying.
I loved the individual stories and the vehicle of the Agora society which ties them all together in a neat package.
A collection that's well worth your time.

My type of book.

I loved it and I would highly recommend it!
I have not read/listened to the first volume but after listening to this one that is something I will be rectifying soon.

This series is one of my favorites. Told in the form of a letter and set in the Victorian era, each story is infused with the language and behavior of the time all revolving around a mystery.

The reader here is the author whose voice is a wonderful match for this series. His absolute familiarity with the material allows all the emotion and nuance he intended. Well done and very enjoyable.

I loved this collection of letters.The crimes they solve are fascinating.I especially enjoyed the very last one in this volume. Narration by Clay Boutwell was wonderful. I was given this book by the narrator,author or publisher free for an honest review.

A great example of this genre

The Agora Letters Volume 2: Five Historical Murder Mysteries. A great collection of short mysteries, very entertaining, and quite unique.
Clay does his own narration (not all authors can narrate) but Clay can and does a fine job.
Highly recommend this book.
I was given a free copy of this audiobook at my own request, and voluntarily leave this review.

There are 5 short stories in this Volume 2 of the Agora Letters, it is nicely narrated by the author. There is a nice variety of mysteries to attempt to solve. I enjoyed this book more than the first. I was gifted a copy of the audiobook in exchange for an honest review.

Could I impose upon you to visit..?

This delightful series of mysteries, written in a style suited to the time period, is enjoyably convoluted. The text eloquently summons up mental pictures of heavily furnitured rooms and gaslit alleys, an atmosphere slightly darker than that surrounding Sherlock Holmes. The stories themselves,
written in the first person, are emotionally packed and, though not entirely satisfactory, are fun, nevertheless. Each story is a quick and easy listen, and an enjoyable diversion.

This volume centers around arch enemy Drake, and includes:

Murder by Monday - Brooke, of the famed Agora Society is persuaded by his reforming friend Nordlinger, to travel with him to Fowler's Manor where the manservant lives in terror expecting that he will die horribly in a matter of days.
Eggs over Arsenic - The host of a small dinner party, a rather unpleasant man, is found murdered the next morning. It is for Captain Barnwell to help discover which of the six other people present in the house committed the crime.
Remember Thy Oath - Boston in the 1800s. In the Agora Society rooms (a Gentleman's club), one of the most popular members, Edison, becomes seriously disturbed by a newspaper article and disappears. His friends Carl, the narrator of the story, and Otto, together with a mysterious priest, track him down...
The Felled Crab Apple Tree - The request for help in finding her brother from a Miss Anne Scott, brings Carl Brook far more than mere adventure to his life.
The Eye of Benny - Carl Brooke (who is also the narrator) faces his old enemy Thomas Drake in this adventure

My thanks to the rights holder of Agora Letters, volume Two, who, at my request, freely gifted me a complimentary copy, via Audiobook Boom.Narrated with skill by the author, Clay Boutwell, this is another of his finely worded historical mystery series set when travel was slow and deduction played a large part in mystery solving. Different from Mr.Sherlock Ho!mes, but simi!at in style.
A fun read.