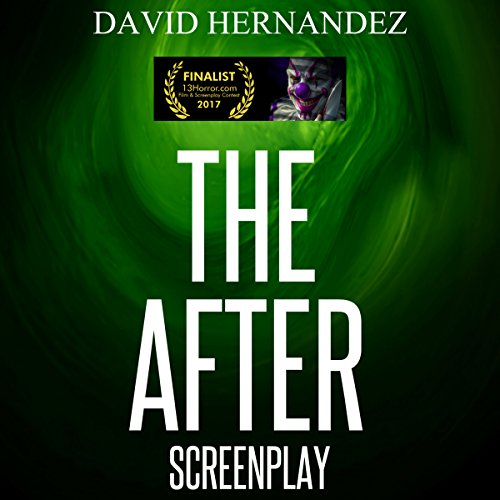 Peter, a brilliant software engineer, is obsessed with finding the answer to an age old question: Is there something after when we die? He builds a machine that can possibly give him the answer, but soon realizes some things are better left unknown.

Usually this type of story is my bread and butter but I just had a hard time with the dialogue. I got really tired of Baby this and Babe that. I wasn't super excited about how the time line played out and the short back and forth chapters. The plot was fun even though it was quite predictable. The narrator did a great job.

Nothing good can come from Peter's obsession, but I was looking forward to seeing some advancements in his experiment. Then the story turns to psychological horror when Peter gets some unexpected results from his experiment.

The premise of the story really intrigued me but despite that, there was something about it that felt unfinished. I realize now that that something is the fact that 'The After' is a screenplay! As a film maker, I can say with some authority that this is not how screenplays are supposed to be consumed - they are designed to be consumed in a visual medium. This may have made of a great film, but as an audio book I felt it was lacking.

Realize, off the bat, that this is a screenplay, not a novella or short story. That definitely makes it a more awkward read for the narrator, that I didn't particularly enjoy. The dialogue was hard to get through, and the whole thing felt unpolished, immature and unpolished. Definitely a shame, because I think there's a good idea here, it just hasn't been fleshed out properly.

I was voluntarily provided this free review copy audiobook by the author, narrator, or publisher. I received this title for free in exchange for an unbiased review.

Well,I listened to it.I found the narration by Rick Gregory horrible.The writing was juvenile and it did not have to be.A decent premise, but a bad telling.I was provided this book free by the author,narrator or publisher for review.

Book provided by author editor or publisher for an honest review.
Dude. Bro. Babe! Said dozens of times made for an unrealistic dialogue. I am still unsure of why a good idea for a story was executed like this. Even under two hours was too long. Sorry. I tried to like it.

I received this title for free in exchange for an unbiased review. Recommend for a quickie read

I didn't like the transitions between seen. However, I really did enjoy the story. “I was given this free review copy audiobook at my request and have voluntarily left this review.”

As author David Hernandez explained, this is not a novel but a screen play and as such, it does not have the descriptive imagery of a well constructed book. Instead, there are stage directions suggesting time and place, such as &amp;quot;Night, the basement.&amp;quot; Quite acceptable except there should have been a much fuller fleshing out of exactly what was visible within that location the first time it was mentioned. Thereafter, the simple 'Peter's basement' would suffice. The same applies to the individual characters: each needs a full visual description, including physical appearance, walk, accent, age - anything which might be distinctive. Thereafter, it is to be assumed that the actor taking the part will flesh out everything else.

The story concept is, in itself, a good one and not what I had anticipated. Although very different, the idea of Frankenstein comes to mind. The idea is a simple one, but very effective: a man wants to know if life continues after death, devises a machine which will trap and display ant continuance.and the reproductions which arise. Told in very brief scenes, it does give a very visual effect but as a film, I fear that there would be too many and too short, unless more fleshed out, the scene cutting flying past with a dizzying speed. Whilst the dialogue is not particularly scintillating, it is adequate although the scenes with Peter's girlfriend could have been better devised.

Since this is a screenplay, the narrator had the perfect opportunity to show his skill as a word artist, giving full and differentiated voice to each of the characters, thus breathing life into them and lifting g this from a flat outline into an actual play and really showcase his own skills. Unfortunately, Rick Gregory does not take this option, allowing the characters to drift undifferentiated through the script. This could quite possibly be what was requested of him to allow greater imagination I from the listener. If so, it was a mistake: on the printed page, the reader would make up their own personalities but in audio, so much is dependent on the narration to fill and lift the characterisations and far too little was given. The protagonists remained flat.

Having said all of this, it was a short and interesting horror, if a little predictable, with a nice ending. It did have a visual impact. With considerable editting it would make a good Twilight Zone type short film, one which I would personally very much enjoy seeing. My thanks to the rights holder for freely gifting me a copy to read, via Audiobook Boom.

Peter has an obsession with solving this ancient question – what happens after death? From his childhood when he loses his beloved pet, he has been driven to find the answer. Now he just might have found the key to unlocking this secret.

Dude, bro, dude, bro…. These two words were over used in this work.

The basic premise is an interesting one. Of course most of us would like an answer as to what happens after death. Peter has become a hazard to those around him with his quest to find the answer. Using his software engineering skills, he created a gizmo that can capture a few seconds of info on the after life. He needs more data, more subjects, and that becomes a slippery slope. From animal experiments to questionable uses for the elderly, Peter blows past these limits that most of humanity would hold to. The mechanics of how the gizmo worked were left very vague and I would have liked that tightened up a bit. I don’t need schematics but I need more than ‘Hey, look I invented this thing last night in the basement and I bet it’ll answer this big, huge question all of humanity has!’

Besides the over use of drunken college slang between Peter and his best friend Brian, the story is written in a screen play format which came across as a bit clunky in the audiobook format. Perhaps this works better visually as a text edition. For me, it made the story feel a bit disjointed. One scene didn’t flow smoothly into the next.

Peter’s girlfriend, Vanessa, is a bit clingy and seems to be just filler. I wasn’t impressed with her character and I think she may have been the only female character… There may have been some other incidental female, but if so, I don’t recall her. As usual, I would have liked a better gender balance and if you can’t do that, than make your single lady count.

Peter’s experiments eventually do come back to bite him and I liked that part of the book. It had a little bit of a karmic feel to it: you get what you put out there and Peter’s getting it.

The Narration: Rick Gregory did a pretty good job. My one quibble is that his voice from Vanessa sometimes came off as cartoony and really whiny. He did have a great voice for Peter, being able to take that voice from sounding like kid Peter, to teen Peter, to adult Peter. He did really well with the over use of Dude and Bro, never sounding like he was rolling his eyes each time he had to utter these terms one more time.