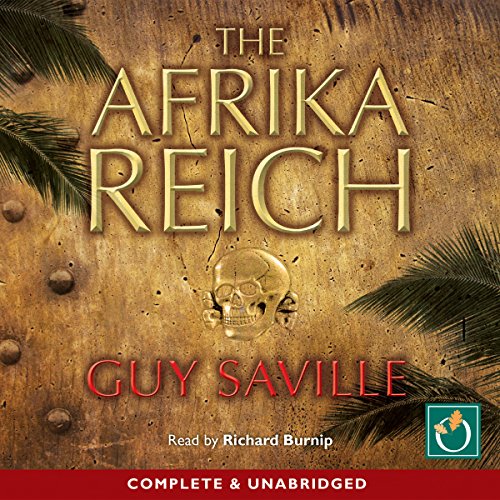 It's 1952. More than a decade since humiliation at Dunkirk brought an end to Britain's war and the beginning of an uneasy peace with Hitler.

In Africa, the swastika flies from the Sahara to the Indian Ocean. The brutal presence of the SS is visible everywhere.

In England, ex-mercenary Burton Cole is offered one last contract. He jumps at the chance to settle an old score with Hochburg. If Burton fails, unimaginable horrors will be unleashed in Africa.

"Saville gives us an horrific reimagining of the Dark Continent." (The Times)
"[The] plot is clever, imaginative and, in its finale, wholly unexpected. In a crowded field, The Afrika Reich stands out as a rich and unusual thriller, politically sophisticated and hard to forget." (Economist)
"Fatherland for an action movie age." (Daily Telegraph)
"The Afrika Reich is a gripping novel and a remarkable exercise in alternate history." (Jacinto Anton in El Pais)
"Set in a world in which Britain made peace with Hitler after 1940, this account of a mercenary mission to Africa makes for an engrossing and convincing debut." (Sunday Express, Books of the Year 2011)
"If readers like terrifying stories behind a dense layer of historical depiction this is an unexpected and unforgettable story that they must read." (Geopolitique Africaine)
"Saville's alternate world is so carefully crafted that it is all too believable." (Jewish Chronicle)
"[A] dark and gruesome narrative dynamic." (Kirkus)
"[An] intoxicating debut...a glorious, exhaustingly energetic romp through an Africa which wasn't, but which might have been.... Written with style, verve and startling lyricism, The Afrika Reich makes serious points as it entertains." (Historical Novel Review)