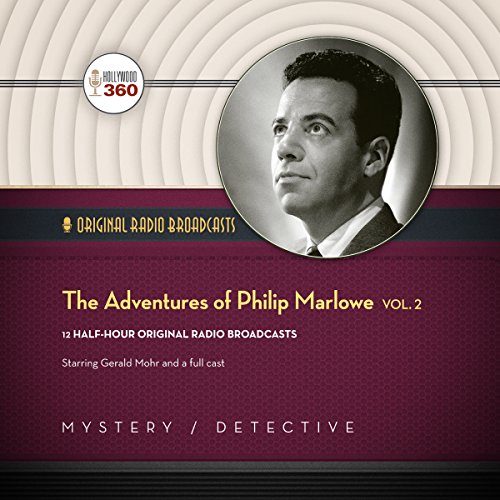 The Adventures of Philip Marlowe, Vol. 2

With producer/director Norman MacDonnell at the helm, the series captured the largest audience in radio by 1949. Scripts were by Gene Levitt, Robert Mitchell, Mel Dinelli, and Kathleen Hite. While Chandler's distinctive similes were largely lacking, the strong, dry, sarcastic narration was there, and the way Mohr delivered his lines made you forget they weren't written by Chandler. Supporting Mohr were radio's best, including Howard McNear, Parley Baer, Lawrence Dobkin, Virginia Gregg, and Lou Krugman. One of the best detective shows on the air at the time, it lasted until 1951.

Episodes include "The Eager Witness", "The Bum's Rush", "The High-Collared Cape", "The Sea Horse Jockey", "The Hiding Place", "The Cloak of Kamehameha", "The Fox's Tail", "The Bedside Manners", "The Uneasy Head", "The Face to Forget", "The Gold Cobra", and "The Last Wish".

What listeners say about The Adventures of Philip Marlowe, Vol. 2