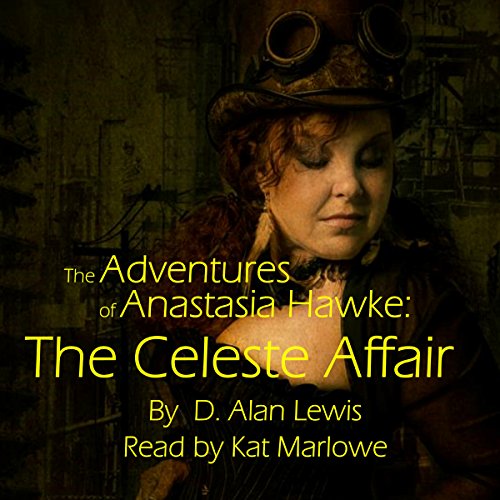 Celeste is an airship like no other, completely automated, incredibly powerful, and hell-bent on the destruction of Washington, D.C., and the end of Abraham Lincoln's presidency.

Anastasia Hawke, an agent for the newly formed Secret Service, and her young daughter are caught up in the chase to stop it. Enlisting the aid of the captain of the British Air Navy's flagship, they race across the Atlantic in a desperate attempt to prevent it from completing its function and prolonging the American Civil War.

But tensions rise between Anastasia and the ship's captain, Lucius Bishop, as their personal lives collide. She's left to decide on the course of her and her daughter's future while the future of America teeters in the balance.

What listeners say about The Adventures of Anastasia Hawke: The Celeste Affair

A great story loved it

Anastasia I loved her strong character, how she took the bull by the horn and nothing stood in her way of the mission

This author gives you a little bit of everything in this short read. It might be short but you are never left hanging as he goes into details about each scene. I found this to be a delightful adventurous listen as he takes you on a journey in taking down a spy who wants the war to continue. The author brings the past to meet the future in this fun loving read. This is a very fast moving listen with pirates, spies, love interest set in the Civil War time frame as he brings modern technology with explosion of two airships meeting in a fight that is life and death. Anastasia buts her and her child's life on the line as she fights the evil and bring justice to the states.

Kat Marlowe did a good job in the narration. I did enjoy the listen as she brought to life the wonderful characters. Her tones were good but at times she really needed to take a breath. It sound at times like she was robotic not all the time just a few places. She did pull me in and take me to another place in time which I truly enjoyed. The characters you had no trouble knowing who was speaking. The male and female were done in great character voices I did not hear any background noise and the audio was very clear. As she takes on more books I am sure she will get it down. I do feel she will become a wonderful narrator and I very much look forward to listening to more from her. It was a really good audio that I would like to listen to again.

The author gives you a believable story with wonderful characters as he pulls you in. At times your heart races wondering if they will make it out alive. The author gives you tons of action as he takes you through a very thrilling read. He even throws in a little love interest which will break your heart. There was nothing I didn't like in this read. The authors writing still is outstanding. For a short read there is a lot going on and you are never left behind guessing. I look forward to listening to more audios from this author. I recommend you pick this up of a pleasant nice listen.

This is more than a story indeed. It is a fairly fast moving listen with pirates, spies, love attention set in the Civil War time mount as he brings modern expertise with blast of two airships meeting in a fight that is life and death. Anastasia buts her and her child's life on the line as she fights the evil and bring fairness to the states. Wow! It is lovely.

It is an interesting story of Anastasia Hawke. The stakes are sky high in The Celeste Affair for ace spy. Set in the Civil War era Anastasia must find the bravery to fight private battle all the while avoiding the war in North America from intensifying worldwide. A well-paced story filled with sword fights and airship combat this is sure to keep you entertained. I suggest grab it.

it is a great book given life by the amazing talents of Kat Marlowe as narrator. i will highly reccomend this book.

If you could sum up The Adventures of Anastasia Hawke: The Celeste Affair in three words, what would they be?

the airs over Washington

this book was awesome and wish it were longer but the author did a great job packing all the action and telling the story
I can bot give Kat Marlow enough credit she is fantastic in narrating this book brought the story to live !!!!!!!!

An action packed adventure in the air

Would you consider the audio edition of The Adventures of Anastasia Hawke: The Celeste Affair to be better than the print version?

As I haven't read the print version of this book, I can't honestly answer this question.

This story was extremely action packed, then you have your flying steamships, pirates of the skies.... yeah I was lost within this.

Which character – as performed by Kat Marlowe – was your favorite?

Anastasia Hawke, who doesn't love a women who is not only strong but also caring?

I'm not very good at these taglines....

I really enjoyed this story, I only wish there was more to it... more about Anastasia & her love for Captain Bishop...

Would you listen to The Adventures of Anastasia Hawke: The Celeste Affair again? Why?

Yes because it has all the makings for an adventure filled evening!

When they stopped the celeste from blowing up washington.

She brings that adventure to life!

Who was the most memorable character of The Adventures of Anastasia Hawke: The Celeste Affair and why?

Anastasia was the most memorable for me I think though I loved them all!!

Impressed of how the story goes. Very exciting to listen and can't wait till the end. The adventure that is worth it!