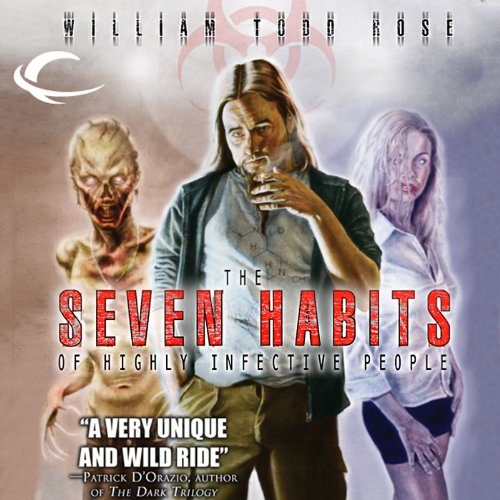 By: William Todd Rose
Narrated by: Nicholas Tecosky
Try for $0.00

Bosley Coughlin can travel through time. And the future does not look good.

Through a heady cocktail of drugs and the occult, Bosley slips through time and space and glimpses The End. Cities lay in ruins, and those who still cling to life hide in the rubble like frightened animals. Walking carcasses shamble through the debris exacting a horrible fate upon any living they find.

This horrific future is the only world fourteen year old Ocean has ever known. Starving and alone, she struggles for even the most basic of necessities: food, water, shelter, love….

In the present, Bosley stumbles across Clarice Hudson and soon realizes that she is much more than a simple shop girl. One by one, she displays the seven symptoms of the contagion that will bring Bosley’s world to an end and create the nightmare Ocean calls home. Clarice may hold the key to stopping the coming apocalypse and sparing Ocean from the atrocities of mankind’s imminent future… but only if Coughlin is willing to push beyond every notion he’s ever held about right and wrong.

"Compelling, interesting, and will keep you intrigued from start to finish… a very unique and wild ride.” (Patrick D’Orazio, author of Comes the Dark)
“There is a very TERMINATOR-esque feeling to the narrative… deserves a spot on your shelf.” (T.W. Brown, author of ZOMBLOG)
"I kept imagining The Dude (from The Big Lebowski) telling a drugged out version of H.G. Wells’ The Time Machine… This is a book that is really worth reading…” (BuyZombie.com)

What listeners say about The 7 Habits of Highly Infective People

Coughlin, a pot smoking time traveler, travels into the future and witnesses the end of humankind (Zombie Apocalypse). In the present day Coughlin decides to stop the outbreak at the source by stalking and eliminating a young women who he believes to be the original carrier. The story is told to the FBI by Coughlin trying to explain his final actions. In his explanation he also tells the story of Ocean, a young girl trying to survive the Zombie apocalypse. The story of Ocean is truly the best part; very emotional and captivating. Although the listener may be a bit confused as Coughlin goes back and forth through various characters and time, everything in the end is resolved and makes sense. The ending made my jaw dropped and heart sink! Creative and interesting twist on the Zombie Apocalypse.

Do you think The 7 Habits of Highly Infective People needs a follow-up book? Why or why not?

Yes I do believe a second book would be great..although not needed.

Unusual take on the zombie apocalypse

This book is told from the perspective of a man from our own present, and an orphan girl who grows up in the world after the zombie apocalypse. Neither of them are the kind of "good guys" you usually read about, but they are good, in their own ways. An excellent read.

Bosley Coughlin can travel through time, or can he? Are his glimpses into the future just delusions from the drugs? Bosley sees the horrible end that is coming and it isn't pretty. He sees glimpses of a girl, Ocean, and he will do anything he can in the present to protect her in the future, even murder. Very creative story by William Todd Rose! I hope to see more of his books make it to Audible! Great narration by Nicholas Tecosky.

Well, you're in for a lot of cursing, that's for sure. BUT, it didn't deter me from enjoying this story, which goes back and forth between before the zombie outbreak and quite some time after it. I feel like almost anything I say will be a spoiler so I have to be careful, but I liked the narration and I liked the way the stories happening at two different points in time came together. The main character tells half of the story though an interview. If you like the zombie genre and you want to read something different from the norm, this is for you. Sequel, sequel, sequel. Please!

Yes. It was very well written and narrated to boot. Not your average zombie book. In fact, you rarely see any zombies in this story. The horror and fun that happen in this book revolves around people and the things that they do to survive and protect. I loved the main character. I got to the end of the book and wanted more. Too bad it's a one-shot. I definitely appreciated the time I had with this story though, otherwise I wouldn't be disappointed that it ended. :)

I couldn't put this book down; finished it in one setting. very interesting take on the apocalypse. make this your next book. you wont be disappointed.