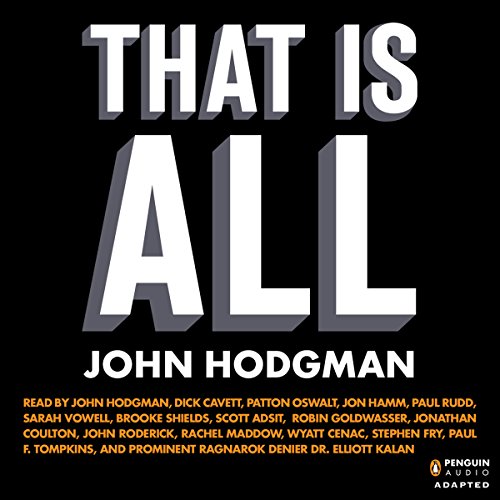 In 2005, Dutton published The Areas of My Expertise, a handy little book of Complete World Knowledge, marked by the distinction that all of the fascinating trivia and amazing true facts were completely made up by its author, John Hodgman. At the time, Hodgman was merely a former literary agent and occasional scribbler of fake trivia. In short: a nobody.

But during an interview on The Daily Show with Jon Stewart, an incredible transformation occurred. He became a famous minor television personality. You may ask: During his whirlwind tornado ride through the high ether of minor fame and outrageous fortune, did John Hodgman forget how to write books of fake trivia? The answer is: Yes. Briefly. But soon, he remembered!

And so he returned, crashing his Kansas farmhouse down upon the wicked witch of ignorance with More Information than You Require, a New York Times best seller containing even more mesmerizing and essential fake trivia, including seven hundred mole-man names (and their occupations).

And now, John Hodgman completes his vision with That Is All, the last book in a trilogy of Complete World Knowledge. Like its predecessors, That Is All compiles incredibly handy made-up facts into brief articles, overlong lists, and beguiling narratives on new and familiar themes. It picks up exactly where More Information left off - specifically, at page 596 - and finally completes Complete World Knowledge, just in time for the return of Quetzalcoatl and the end of human history in 2012.

What listeners say about That Is All

I would definitely recommend at least two thirds of this book to a friend, which by itself is easily worth one credit.

If you’ve listened to books by John Hodgman before, how does this one compare?

Not as strong overall as the first two books in the series.

Have you listened to any of John Hodgman’s other performances before? How does this one compare?

The performances by Hodgman, and a cast of others is great as always.

This book has some hilarious parts, but suffers in a few areas. First Jonathan Coulton is only in it a short while, which is a bummer, but his part of the book is at least one of the high points. Second the book delves into an oddly depressing, short, autobiographical section that felt kinda out of place, and sort of killed the mood for a while. Third, the 700 X section of this book (700 hobos, and 700 molemen in the previous book) is about one and a half hours of John Hodgman speaking backwards over a music track. Even when I found a youtube video of someone who had kindly reversed the audio to make it understandable, the music kinda drowns out his voice. It's a real bummer that I can't bring myself to listen to it, because I bet it was pretty funny. I'm sure some might appreciate the humor of reversing the names of these 700 dark gods, but I can't imagine even they would sit through that entire section of the book. I have to imagine the book doesn't suffer from this problem, but I could be wrong.

In this eagerly awaited final volume of his compendium of world knowledge, Hodgman has reached the apex of his career (and finale if, as he predicts, the world will end with Ragnarök on 12/21/2012).

Hodgman's skill at creating and describing a delightfully ridiculous version of reality never fails to please. His mock serious narration of the "facts," together with the contributions of various guests, including Paul Rudd, Jonathan Coulton, Jon Hamm, Rachel Maddow, Paul F. Tompkins, Dick Cavett, and Brooke Shields, makes for a delightful listen.

Hodgman addresses issues that are admittedly tough for him, such as wine and sports, but he valiantly soldiers on, relying on just enough actual facts for the listener to start wondering where the real stuff stops and the fantastical begins.

A large part of the pleasure of this audiobook is Hodgman's own wonderfully dry narration which, along with the guest commentaries, makes for the perfect, and very funny, audiobook experience.

Magnificent nerd humor--make sure you catch it before Ragnarök!

What did you love best about That Is All?

What other book might you compare That Is All to and why?

Which character – as performed by John Hodgman – was your favorite?

He plays himself. So: that one.

Doesn't Translate From Text To Audio

I'd like to first state that John Hodgman is my all-time favorite author. Unfortunately the text from this book just doesn't translate well into an audio format. The content is still all there but there is something that is somehow lost while listening to to book. I HIGHLY reccomend READING this book but I'd pass on checking out the audiobook.

The best one out of the 3

This is by far the best entertainment i have in audio format. It is the best out of the 3, it's like he perfected his performance throughout the books. Must listen!

What was one of the most memorable moments of That Is All?

his comedic style is very much in tune with my own.

No way! Way too long and i wanted to last as long as possible! i listened to it while i drove. It was great!

I hope you do more Judge John Hodgman! Maybe a JJHO audiobook!

Do you accept the challenge? Keep in mind that this is nearly 17 hours of your life you will never get back!

As a fan of John Hodgman's first book, "The Areas of My Expertise" (which is, after all, my favourite audiobook -- period), I felt compelled to both begin and complete this book, even after the disappointment that his second book, "More Information Than You Require", proved to be. Nobody warned me!

Don't get me wrong. There are some bright spots in both the second book and in this third as well, but they are increasingly marginalized amid hours of remarkably unfunny material which fills the rest. I have to give it 3 stars overall because there are some gems in here and some fantastic performances, but I feel somewhat guilty doing so.

Alas, Hodgman is a comedic genius and wordsmith. But what happened here? Like Lucas and the Wachowskis before him, maybe he set the bar too high with "Expertise" and just ran out of good ideas. I know all the jokes and punchlines already, but I still find myself laughing out loud every time -- sometimes in anticipation of a joke I know is coming! Read, listen, or otherwise consume the first book, but steer clear of the rest of the series. YOU HAVE BEEN WARNED!

Mr. Hodgeman has a knack for making up silliness and sharing it with us, his minions.

That is all I needed because that is all it needed to be. thank you

Yes. It's hilarious, bizarre...and, at times, even poignant.

What was one of the most memorable moments of That Is All?

Just one? Try "Today in Ragnarok."

The entire cast was amazing. Hodgman almost requires a partner whom he can "educate" on all things falsely historical.

Laugh. Do not listen to this in public. You will randomly burst into giggles and people will think you are insane.

The first part of this story was brilliant. The references were funny but.... towards the middle where it jumps into a short story not associated with the actual story, the enjoyment factor started to plummet...

I would certainly listen to the first half but maybe skip the second.

Hodgman takes us on a journey. Hopping between his various survival facilities and notable world landmarks dispensing mostly false, but always hilarious knowledge along the way. His frame is interrupted not once, as he fully embraces his life as a wise, but deranged millionaire. By way of explaining the world to his myriad celebrity guests, he also implores us to prepare for the imminent end of civilisation known as ragnarok. Hodgman is witty, absurd & he narrates with perfect pace and delivery to best compliment his brand of humour. A recommended listen for fans of comedy ranging from Flight Of The Conchords to Python. Excellent.

A fantastic prediction of what won't happen

Far from being a regular interpretation of his international non best seller, Hodgman has created an impossibly complex epic of nonsense and surrealism. Filled with uncredited special guests, diversions upon diversions, intentional lies and wine tasting, the humour has more of the feel you would find in his regular podcast appearances than a staid audiobook reading. Some may find the backwards read death metal folk song that takes up the last hour too much to deal with. Others may find it a pleasant palette cleanser after the dark sci fi mood shift of the diary of Ragnarok. Overall though there are more laughs and memorable moments than you will find in most books of its kind. And for one credit it's an absolute bargain.

Full on crazy - and I'm OK with that

This is one of the strangest audiobooks ever, giving full reign to Hodgman's wit and weirdness. It includes surprise guest cameos (including a game Paul Rudd, pulled out of an another studio where he believes he is recording. Sadly, he's being pranked.) A real highlight is the page a day calendar for Ragnarok. It foretells the end of the world and is, in itself a very funny short novel. Rambling, charming, gross and strange. That is all.