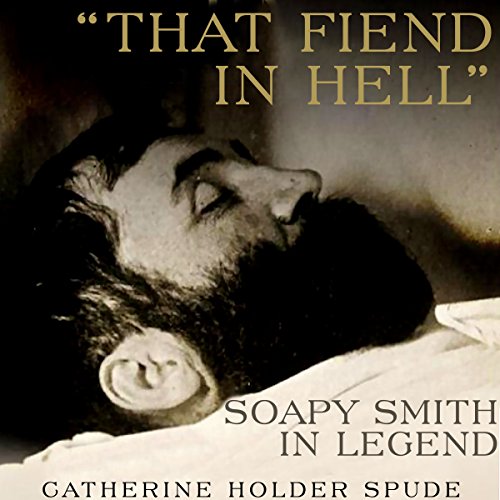 That Fiend in Hell

As the Klondike gold rush peaked in spring 1898, adventurers and gamblers rubbed shoulders with town-builders and gold-panners in Skagway, Alaska. The flow of riches lured confidence men, too - among them Jefferson Randolph "Soapy" Smith (1860 - 98), who with an entourage of "bunco-men" conned and robbed the stampeders. Soapy, though, a common enough criminal, would go down in legend as the Robin Hood of Alaska, the "uncrowned king of Skagway", remembered for his charm and generosity, even for calming a lynch mob. When the Fourth of July was celebrated in '98, he supposedly led the parade. Then, a few days later, he was dead, killed in a shootout over a card game.

Soapy Smith in Legend is a tour de force of historical debunking that documents Smith's elevation to western hero. Tracking down some 100 retellings of the Soapy Smith story, Spude traces the efforts of Skagway's boosters to reinforce a morality tale at the expense of a complex story of town-building and government formation. The idea that Smith's death had made a lawless town safe served Skagway's economic interests. Spude's engaging deconstruction of Soapy's story models deep research and skepticism crucial to understanding the history of the American frontier.

What listeners say about That Fiend in Hell

The story of Soapy Smith is a TV series waiting to happen, with all the action, intrigue, and back-story to keep any audience captivated. Spude expertly separates the fact from legend with terrific insight but it was the narration that brought the story to life for me. Gray's voice pulls you into the story of the frontier city Skagway, the politics of the time, Soapy's gang, and the infamous con-man and crime boss himself - Jefferson &quot;Soapy&quot; Smith. This is a must &quot;listen-to&quot; for anyone who wants the real story of Soapy Smith!

When listening this book when I’m driving to work, I learned a lot of the people in Skagway, Alaska during the gold rush days. the author, Spude, has research and reveal Soapy Smith who was painted as an awesome villain of the past wasn’t really awesome.

As for Spude’s writing, it seems a little elementary when I was listening to it. The opening chapters seems like a middle school students when they write their essays. The story itself has a nice flow to it, but wasn’t one of my favorite stories to listen to.

As for the narrator, Gray is one of my favorite narrator in the audio book world. He has a great sense of storytelling.

Worth the time. Read it.

I truly recommend this book to everyone, especially those involved in separating legend from truth in the myths of the old west. I'm not sure you'll reach one conclusion. How could you? Legend and myth evolved in too many ways and directions each with a role to be no more than one story.

A great tale of intrigue, con men, and the west.

If you love history and stories of the west you will love this telling of one of the greateat con men. The story comes to life and brings to life the legend of soapy smith. Honestly it makes life today seem dull and boring. Check it out you will not be disappointed.