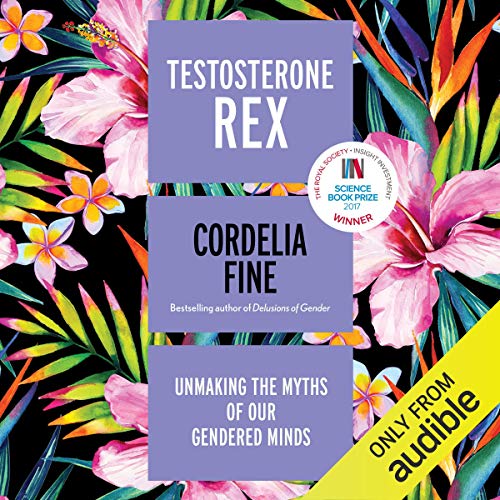 By: Cordelia Fine
Narrated by: Willow Nash
Try for $0.00

Testosterone Rex is the powerful myth that squashes hopes of sex equality by telling us that men and women have evolved different natures. Fixed in an ancestral past that rewarded competitive men and caring women, these differences are supposedly recreated in each generation by sex hormones and male and female brains. Testosterone, so we're told, is the very essence of masculinity, and biological sex is a fundamental force in our development.

Not so, says psychologist Cordelia Fine, who shows, with wit and panache, that sex doesn't create male and female natures. Instead, sex, hormones, culture and evolution work together in ways that make past and present gender dynamics only a serving suggestion for the future - not a recipe.

Testosterone Rex brings together evolutionary science, psychology, neuroscience and social history to move beyond old 'nature versus nurture' debates, and to explain why it's time to unmake the tyrannical myth of Testosterone Rex.

What listeners say about Testosterone Rex

Couldn't get into this as I found the narration very monotonous. A shame because I was really interested in the content.

Learning we should teach in schools

Cordelia Fine 's work is so important. Instead of simplistic either/ors she gives us deep, nuanced knowledge about sex and gender that undoes all of our assumptions. And she makes it an easy read and funny too. Exceptional.

This was a really easy to follow, well researched romp through all the reasons that gender determinism is so deeply flawed

Having read much evolutionary psychology down the years I'd almost got to the point where I believed the gender issue settled. But Fine has made me think again, largely by her fine grained descriptions of matters which turn out to be more complicated than broad generalisations. Her writing is sharp and witty. Highly recommended.

Well worth a read. Great insights to gender views in the modern world and science. Well written and amusing