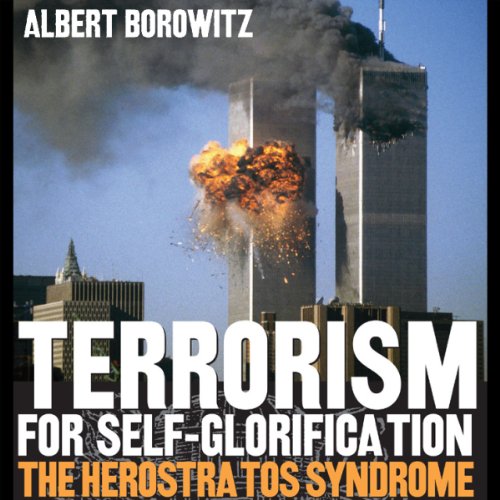 By: Albert Borowitz
Narrated by: John Alexander Brancy
Try for $0.00

Terrorism for Self Glorification: Herostratos Syndrome examines the motives of terrorists, from ancient Greece to the present day. In this timely study of the roots of terrorism, author Albert Borowitz deftly assesses the phenomenon of violent crime motivated by a craving for notoriety or self-glorification. He traces this particular brand of terrorism back to 356 BCE and the destruction of the Temple of Artemis at Ephesus by arsonist Herostratos and then examines similar crimes through history to the present time, detailing many examples of what the author calls the "Herostratos Syndrome," such as the attempted explosion of the Greenwich Observatory in 1894, the Taliban's destruction of the giant Buddhas in Afghanistan, the assassination of John Lennon, the Unabomber strikes, and the attacks on the World Trade Center buildings.

The study of terrorism requires interdisciplinary inquiry. Proving that terrorism cannot be the exclusive focus of a single field of scholarship, Borowitz presents this complex subject using sources based in religion, philosophy, history, Greek mythology, and world literature, including works of Chaucer, Cervantes, Mark Twain, and Jean-Paul Sartre.

Terrorism for Self-Glorification, written in clear and direct prose, is original, thorough, and thought provoking. Scholars, specialists, and general readers will find their understanding of terrorism greatly enhanced by this book.

"A unique work of...history, made all the more interesting by its relevance to the time in which we live." (James R. Elkins, editor of Legal Studies Forum)

What listeners say about Terrorism for Self-Glorification