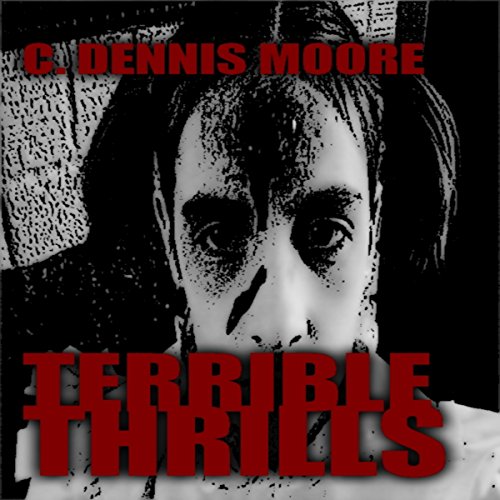 Horror author C. Dennis Moore returns with his first short story collection, the one that prompted Cemetery Dance magazine to call him "an author worth keeping an eye on." When the original publisher went out of business, the book went out of print, but now it's back in both print and audiobook formats to once again invite readers on 25 terrifying journeys. In Terrible Thrills, Moore packs a punch with some of his shortest stories, proving brevity really is the key to effective communication. The horrors inside include a late night Halloween attraction that traps half a dozen people in an underground catacomb. Lost in the dark with no way out, one guest treads a dark path into madness and paranoia in a story that combines the atmosphere of Edgar Allan Poe with the scares of Stephen King. In "The Son of Man", three friends discover a living, growing creature is forming in the clouds outside one of their houses. And while the whispered words echoing through their heads usually inspire hope in the faithful, this time the friends aren't so sure it doesn't spell their doom. "Plaything" and "Parliament of Jim" take wildly different looks at the question of identity and free will, while "The Stand-In" poses the question "How much does where we come from determine where we're going?" as the narrator tries to track down his birth father, an abusive psychopath out for revenge. In "Working for the Fat Man", an immortal Santa Claus uses the names on his Naughty list to feed his powers, but what happens if he slips up and nabs one of the Nice kids instead? "In the Town of Broken Dreams" watches the town of Yellow Brook, KS, as they chase down and execute a mysterious stranger, then live with the consequences of their actions as everyone in town slowly succumbs to the bad luck that follows.