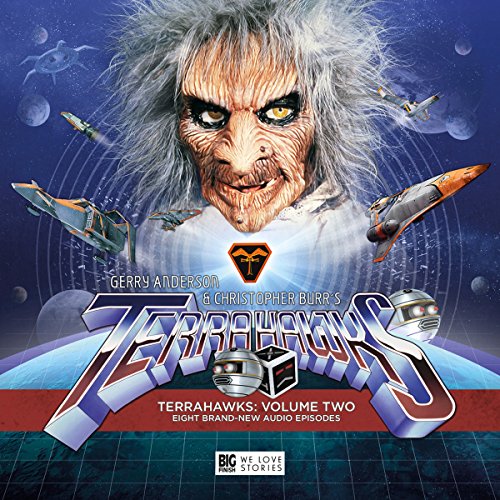 'Terrahawks, stay on this channel....'

Back for more, after 2015's popular release, is Terrahawks, the fondly remembered action-adventure comedy originally brought to you by the men who created Thunderbirds, Captain Scarlet and Dick Spanner.

In the not too distant future, the Earth finds itself under constant threat from Zelda, a blood-thirsty android who, along with her fiendish family and monstrous creations, has established a base on Mars. The only thing standing between this evil queen and her quest for the ultimate annihilation of mankind are the Terrahawks - an intrepid band of heroes led by the stern but fair clone, Doctor Tiger Ninestein.

In this new series, the Terrahawks defence grows all the more desperate when a terrifying new enemy joins the androids on Mars. This new villain has a sinister connection to Queen Zelda; and together with an army of new monsters, the Earth doesn't stand a chance!

Ninestein and Zelda both receive invitations to appear on a gruesome gameshow - The Sale of the Galaxy. But will grim gameshow host Nickel-Plate Starsons' personal history with Zelda influence the outcome of the game?

2. 'The Trouble with Toy Boys' by Chris Dale.

A pernicious puppet - one half of a famous ventriloquist act - is on the loose, but even the Terrahawks can't keep a bad dummy down as Timmy the Toy Boy takes his final act to Hawknest!

The return of a missing NASA probe and an encounter with an old flame of Ninestein's means a case of fatal attraction for the Terrahawks.

There's something fishy about a gang of slick would-be heroes.

5. 'Chain of Command' by Geraldine Donaldson.

With Zelda missing, the government's focus is firmly on the Terrahawks, and Ninestein is under serious pressure to cooperate. So when a mysterious device lands in Texas, Kate and Mary must go on a Thelma-and-Louise-style mission to prevent the package getting into the wrong hands.

Malevolent MC Count Anaconda welcomes one and all to the orbiting big top, although the chances are that you may never leave....

8. 'My Enemy's Enemy' by Jamie Anderson.

Hiro and Ninestein finally decode Zelda's message, and not a moment too soon.

Guk Warning: This audio features murder, violence, destruction and warfare, all involving puppets - some scenes may be disturbing for puny Earth-scum!

"Jamie Anderson and company do a marvellous job throughout this second box set, blending the usual social commentary with mythology to lend all the characters depth." (Sci-Fi Pulse)
"Terrahawks remains as daft and loveable as ever, with plenty of excitement, a dash of the grotesque and a healthy dollop or two of satire. Though the finale seems pretty climactic, we are keeping our fingers firmly crossed for a further series of launches from Hawknest. Stay on this channel! 5 Stars." (Cult Box)

What listeners say about Terrahawks, Volume 2

Terrahawks volume 2 is sadly not as good as its predecessor, volume 1 - which was fantastic. A big reason is budget, i.e. too few actors. As a result any new characters in a story have to be voiced by the already overstretched small group of gifted actors and unfortunately some of these characters don't sound that unalike their main character(s).

It still has its high points, for example ‘Sale of the Galaxy’ starring Nicholas Parsons, but a couple of the stories felt a bit flat. Probably as many were originally written without Zelda (Denise Bryer) as explained in the ‘behind the scenes’, but fortunately with improved health/voice Denise did decide to join the team so scripts were quickly rewritten.

There are eight stories in this set:

Plus Behind the Scenes 57 mins