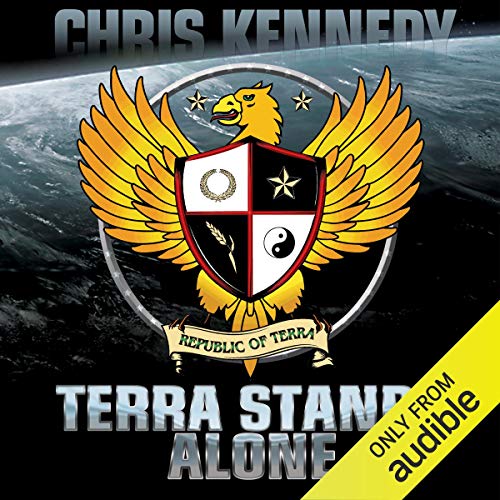 By: Chris Kennedy
Narrated by: Craig Good
Try for $0.00

The Drakuls have found the solar system. A merciless race, there is nothing left once the Drakuls have conquered a civilization except the bones of its dead. When the first Drakul exploratory ship emerges from the stargate, Earth's days become numbered. Although LCDR Shawn "Calvin" Hobbs and the crew of the TSS Vella Gulf came back with a battleship from their last mission, it won't be enough to defend the solar system from the Drakul menace. The Mrowry and the Terran artificial intelligences have run the numbers...and Terra has come up wanting. The crew of the Vella Gulf knows what a Drakul invasion means: the end of civilization as they know it. Can they find a way to stop the devastating onslaught of the Drakul fleet? Even their new allies, the Mrowry, think Earth's salvation is unlikely. The Earth has more enemies than it can count and no prospect of aid. In the face of extinction, Terra Stands Alone!

We could do without the constant chapter breaks

Sorry the story is very shallow. The usual earth runs into evil aliens story. The universe the story is set in is just not there. I will not be listening to anymore of Kris Kennedy’s books.

This is a really good story.

The story really draws you in. And I am really enjoying the character development and the little bit of mystery that still surrounds all the main ones. It left me wanting more and I wonder what is yet to come. The narrator is getting better but is still just a little too mechanical for me. I think his best character is the Clint Eastwood / Dirty Harry voice of Captain Paul "Night" Train. With a few more volumes maybe the rough edges will be smoothed out. Overall, this is a very compelling read.

I enjoyed the book. Before getting into it you ought to know that the author padded it with characters like archangels a guest appearance by elves. Don't hold up for strict adherence to the laws of physics, such as Newton's first law of motion. Still if you're looking for something enjoyable I'd recommend it.

I truly enjoyed the storyline could not stop listening. I am eager to read the next aventure in this storyline.

3rd in the series and very entertaining.

I purchased all three in this series. i'm hooked so when number four comes out it will be a must buy..
The narrator was good but as there are many characters in these stories. I would like to see the use of multiple narrators to give more depth to the stories characters.
perhaps to males and one female just a thought..
Yes this was very good audible book. Start at the beginning for the best enjoyment of this series.

Save the world, explain ancient history all here

Complex science issues that might slow some books down are as quickly dispatched as the enemy's they run into. Help the galaxy and save the world. Heroes one and all !

the writer is bringing all the mythology of Earth's civilizations and trying to give them some sort of relevance in a military space opera. I love it. Can't wait for the next one!

I like it. especially the reader...he is different in great way. I can't way for the next book.l!

Continuing a great story but not best narrator

Nothing more to say, really good story arc but the narration does not suit at all