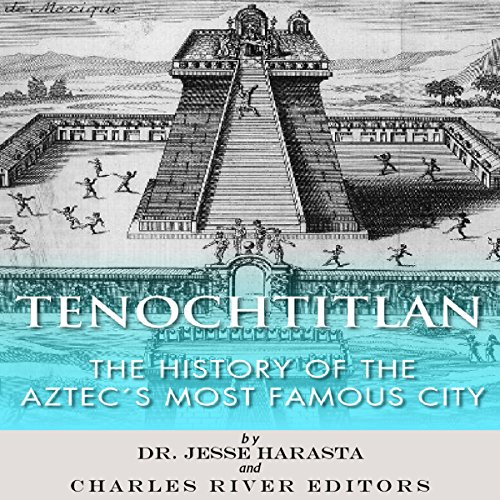 Tenochtitlan: The History of the Aztecs Most Famous City

"When we saw so many cities and villages built in the water and other great towns on dry land... we were amazed and said that it was like the enchantments they tell of in the legend of Amadis, on account of the great towers and buildings rising from the water and all built of masonry. And some of our soldiers even asked whether the things that we saw were not a dream... I do not know how to describe it, seeing things as we did that had never been heard of or seen before, not even dreamed about." - Bernal Díaz del Castillo

Mexico City is not a new place. Mexico City instead has much in common with cities like London, Delhi or Cairo in the East in that it is an ancient city dating back centuries before the arrival of Colombus in Hispañola. For, while much (including the name) has changed, Mexico City is the mighty Tenochtitlan, capital of the Aztec Empire and the great American metropolis of the Spanish Empire. There has been no break in occupation, and despite much devastation, the city was never fully destroyed.

From the moment Spanish conquistador Hernan Cortés first found and confronted them, the Aztecs have fascinated the world. Nearly 500 years after the Spanish conquered their mighty empire, the Aztecs are often remembered today for their major capital, Tenochtitlan, as well as being fierce conquerors of the Valley of Mexico who often engaged in human sacrifice rituals. Even though the Aztecs continue to interest people across the world centuries after their demise, it has fallen on archaeologists and historians to try to determine the actual history, culture, and lives of the Aztecs from the beginning to the end, relying on excavations, primary accounts, and more.

What listeners say about Tenochtitlan: The History of the Aztecs Most Famous City

This is a short book, only a little over an hour. I do appreciate brevity and have no qualms paying for a good, short book. My time is valuable. However, I have a number of problems with this book:

- It is more about the conquest of Tenochtitlan than about the city itself. There is very little context about other cities and cultures around central Mexico at the time. Many, many interesting stories, facts, and basic elements of life in Tenochtitlan were omitted.

- It has a number of significant omissions and errors. It's incomplete. I could have found more interesting data by reading Wikipedia and a couple online sources. I wrote better historic reports in high-school.

- The book just lists a bunch of facts, dates and events, with no story or correlation. There is no passion for the topic.

- Worst of all, the narrator is horrible. He has no idea how to pronounce they key names, starting with the title of the book: Tenochtitlan, nor most other Náhuatl names, not event names in Spanish like Velazquez. It's disrespectful. How can you trust a book about a topic when they can't properly even pronounce the most basic terms? The author cared so little about this book, they did not stop to talk to any of about 20 million people in the U.S. who could have properly taught them how to pronounce the title of the book. Hearing about Huitzilopotchtli in the book is ridiculous, the narrator can't even pronounce anything that sounds like it. Even the name of Cortéz is mispronounced. An insult to the incredible culture of the Aztecs and to history itself.

As someone who has lived in MexicoDF I found myself having to guess at many of the names as they were so badly mispronounced I wasn't sure what the reader was referring to. Otherwise a good brief history-

Can’t understand if you can’t pronounce the native words

I think this is a good and useful book, but for the Spanish speaking listeners, and specially for the ones living in Mexico City, it is a shame that someone not really able to pronounce the native words reads the book. Sometimes, it is imposible to understand what, who or where the author is talking about.