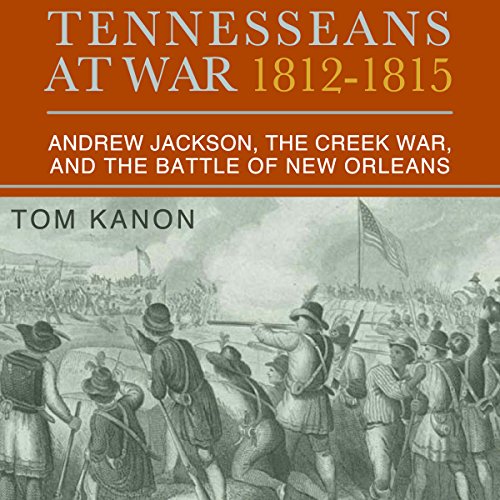 Tennesseans at War, 1812 - 1815 by Tom Kanon tells the often-forgotten story of the central role citizens and soldiers from Tennessee played in the Creek War in Alabama and War of 1812.

Although frequently discussed as separate military conflicts, the War of 1812 against Great Britain and the Creek War against Native Americans in the territory that would become Alabama were part of the same forceful projection of growing American power. Success in both wars won for America security against attack from abroad and vast tracks of new land in "the Old Southwest."

In Tennesseans at War, 1812 - 1815, Tom Kanon explains the role Tennesseans played in these changes, and how they remade the South. Not only does he narrate the military campaigns at the heart of the young nation's expansion, but he also deftly recalls the economic and social pressures and opportunities that encouraged large numbers of Tennesseans to leave home and fight. He expertly weaves these themes into a cohesive narrative that culminates in the vivid military victories of the War of 1812, the Creek War, and the legendary Battle of New Orleans: the victory that catapulted Tennessee's citizen-soldier Andrew Jackson to the presidency.

Very glad to have an audio of this history. Well done, covers more than just the white person POV.