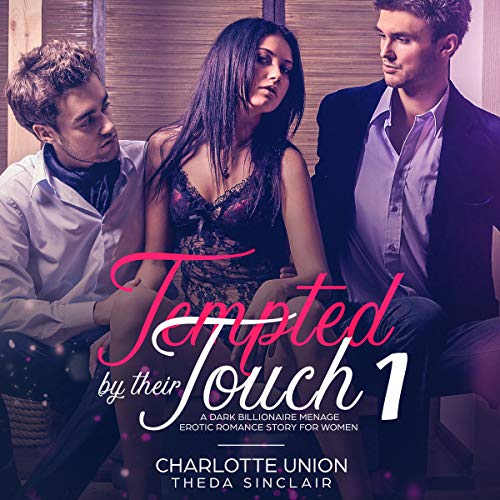 Tempted by Their Touch 1

By: Charlotte Union,Theda Sinclair
Narrated by: Jade O'Kelley
Try for $0.00

Micah’s mouth turned up into a lazy grin. “Karl and I get a little competitive sometimes over everything; work, sports, and women.”

"Oh, so women are a game to you two?” I huffed, bothered by his implication. I watched as Micah carelessly shrugged his shoulders in reply.

“Well it is called the dating game. Isn’t that the reason anyone plays?”

Part one of two from the Tempted by Their Touch romance series.

Ashlyn thought she had her life perfectly mapped out. Get a college degree? Check. Move in with her boyfriend? Check. Pursue a bright new architectural career - in a brand-new city - with said boyfriend? Check. However, all that was a little under a year ago. Nowadays, having been dumped by her cheating ex-boyfriend, Ashlyn’s life is made up of working extra-long shifts at the Tasty Bite Cafe as she struggles to make ends meet and rebuild her self-esteem.

After months of no love life to speak of, Ashlyn decides to take a risk that will soon land her deep in the arms of not just one, but two billionaire playboys. She’s heard cautionary rumors about the two men, but Ashlyn soon learns she just can’t seem to resist the gorgeous green-eyed Karl and the equally handsome, dark, and driven Micah.

Authors' note: This audiobook is the first part of the Tempted by Their Touch series. Inside this audiobook, there are depictions of a sensually mature nature.

What listeners say about Tempted by Their Touch 1

A lot of detailed sex scenes inside.

A lot of detailed sex scenes inside, which is great, but I would have preferred a bit more of a fleshed out story line.

This book is just so full of Draaaamaaaa!

This book is just so full of Draaaamaaaa! And I want more of it :)

The tension between the three main characters is great, but I have to say that I am leaning for Karl. He is so sweet (although I don’t mind Micah - he sounds delicious).

A very good start to the series! It was fantastic enjoy listening good inside with very god romance.

Well written, and I give it a high recommended just for that first sexy scene alone.

This could have been better if there had been a male narrator thrown into the mix. Jade did a good job on her own but I guess my preference nowadays is for multi-narrator romance.

Tempted book 1 is a bit short yet is so well written I don’t even mind the cliffhanger ending. The sex scenes were very detailed (I’m still blushing). Well, I’m off to go start book 2!

This first book in the Tempted series starts out at a plodding pace that soon quickens up the moment the two billionaire brothers come onto the scene. I would also like to praise the narrator, their delivery was great and I would love to hear more by Jade.

Would sound better with multiple narrators.

The narrator did great; still though I prefer audiobooks where the guys voice/lines is done by a man and the woman's voice by a woman.

This was so good and I can’t wait to read book 2… and with a man like Micah waiting in the wings who would even want to wait!

Hotness in a silly way

Thus far there’s a lot of incredible sexual tension all the way through this book. However the way that Karl and Ashlyn meet kind of stretches the bounds of credulity a little.

An interesting start that ends on a cliffhanger - I am going to need to get my hands on book 2 to find out who Ashlin chooses.

The characters don’t have enough depth for romance and too much depth for erotica. It kind of felt like Tempted By Their Touch straddled the uncomfortable middle in between. Maybe I need to listen to the next part before I can make up my mind whether I like this series or not.