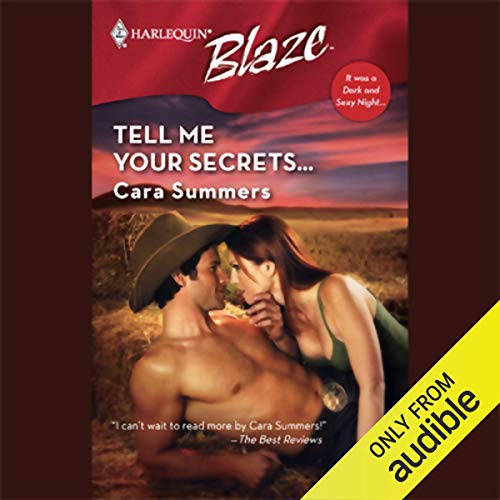 By: Cara Summers
Narrated by: Nellie Chalfant
Length: 6 hrs and 19 mins
Categories: Romance, Contemporary
4 out of 5 stars 3.8 (106 ratings)
This title is included in Audible Escape

It was a dark and sexy night, and Brooke Ashby knew she was in over her head.

As head writer for the soap opera Secrets, she was used to living vicariously through her characters. But that all changed the day she learned she was adopted, and that her identical twin sister had mysteriously disappeared. What else could she do but try to discover what had happened, even if it meant taking her sister's place? It shouldn't be hard. After all, she was good at research and had a talent for acting, if she did say so herself. Her plan seemed foolproof, until Brooke found herself in bed with her sister's fiance.

Cara Summers has done it again! "Secrets" was such a good romance with lots of suspense. If you have read or listened to "When She Was Bad", you will enjoy this, as this is an inter-connecting story. The chemistry between the male and female lead was awesome and the story line was really interesting. For those who like romance and suspense - this is the perfect read.

14 of 14 people found this review helpful

Just keep adding more of her audio books and I'll keep buying. These are great for driving to work.

This storyline was weak at best. The characters were uninteresting and the romance element was simply not believable. If there really are people who would sleep with their sister's fiancee after knowingly deceiving them AND after only knowing them less than 48 hours, I'm glad I don't know any of them.