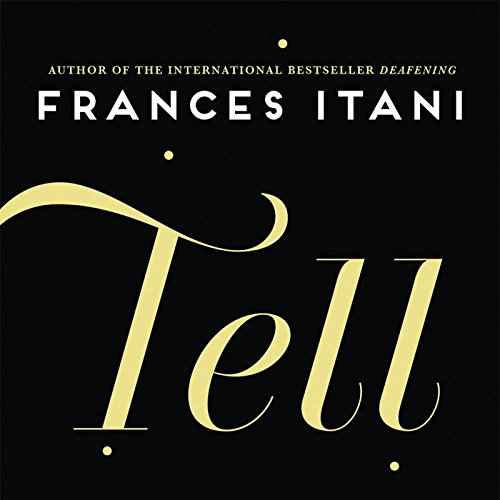 By: Frances Itani
Narrated by: Luke Daniels
Free with a 30-day trial

The international debut sensation Deafening launched the story of Grania, deaf from the age of five, and her sister Tress, who helped to create their secret language. Tell picks up from the return of the sisters' husbands from the war, and follows Tress's partner Kenan, a young shell-shocked soldier who confines himself indoors, venturing outside only at night to visit the frozen bay where he skated as a boy. Saddened by her altered marriage, Tress seeks advice from her Aunt Maggie. But Maggie and her husband Am have problems of their own. Maggie finds joy singing in the town's newly created choral society. Am, troubled by the widening gulf in his marriage, spends more and more time in the clock tower above their apartment. As the second decade of the 20th century draws to a close, the lives of the two couples become increasingly entwined. Startling revelations surface as layers of silence begin to crumble.

Told with Itani's signature power and grace, Tell is both a deeply moving story about the burdens of the past, and a beautifully rendered reminder of how the secrets we bury to protect ourselves can also be the cause of our undoing.

What listeners say about Tell

The book is very slow and for me there was not that 'hook' that makes me want to read on. I listened of course, I wanted to complete the story. I found most of the characters well developed; I found my self imagining Am and Maggie as much older because of the way the narrator pitches his voice- about three-quarters of the way Am mentioned that he was 'almost 50' I thought the old man voice the narrator gave him sounded more like 75. I have to say also that the narrator spoke Kenan's lines as though his jaw was permanently clenched. I found this method of speaking very distracting. I feel like the attempt was to sound like someone depressed but it sounded like someone with his mouth wired shut.Narration is so important in an audible book. The story lines, the voices of other characters was fine, even as I mentioned above he gave Am a very old sounding voice.

I found the patience Tress and other family members and friends gave Kenan was well described. I thought the relationship between Luke and Mags was well done even though Mags sounded more like 60 than her probable age of 40+. I also found the theme of secrets and thoughts tamped down were a good representative of that time- the 20s and that culture.

Pleasing in the main but he mis-represented his characters who were in their 40s and he over did it with Kenan in his attempt to convey his reticence, his depression and his struggle to 'fit in'. The narrator has a pleasing voice, well paced and enjoyable to listen to except for the issues mentioned above.

No. The book was ruminative and slow and I think the movie would drag.