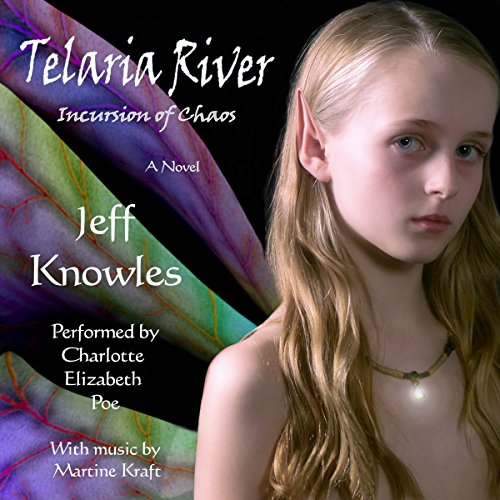 By: Jeff Knowles
Narrated by: Charlotte Elizabeth Poe
Try for $0.00

Perhaps you have seen their memory-images; now, you can hear the stories of Talis directly from the Queen's appointed storyteller. Voiced beautifully by Charlotte Elizabeth Poe and accented with music by Martine Kraft, a young pixenni girl named Elesindra chronicles a pivotal time for the Telaria River Valley, when the Incursion of Chaos threatened to tear their world apart.

Standing nervously awaiting her ceremonial First Flight, she is unaware she is on the brink of more than her own rite of passage. The pixenni, sylphaen, faedren, and even the powerful sylmanni races all rely on the river's water and the bounty of life it supports. But a spreading sickness threatens to rob the flying races of their flight magic, while strange beasts and phenomena begin appearing throughout the region. Tiny Elesindra must learn to draw upon her inner strength to fight for her loved ones' survival, while Queen Taliana struggles to investigate the source of the chaos. While new alliances are forged, members of the four very different sylphaen tribes come together to launch their own desperate hunt.

Through frightful encounters and setbacks, they learn that a workable coalition can only be built with trust and tolerance. But will their unique combination of skills and srin magic be enough?

Telaria River is a faerie tale like no other. It is at once epic and subtle, virtuous and imperfect, magical and practical. It is a story of ingenuity and loyalty and perseverance, safe for most young listeners without talking down to sophisticated ones. The imagery, simultaneously exotic and realistic, emphasizes storytelling and natural beauty to vividly bring this tale of courage to life.

What listeners say about Telaria River

This audiobook told a truly original, unique tale beautifully read by the narrator. A fairy based fantasy, it also holds elements of science fiction in its flavor. The story is complex enough to hold the attention of an adult, but young girls will love the strong female characters, who hold positions of responsibility in their world. The little Pixenni are fearless in tackling adversity. Highly recommend listening along with the book, which is filled on every page with beautiful artwork that follows the story.