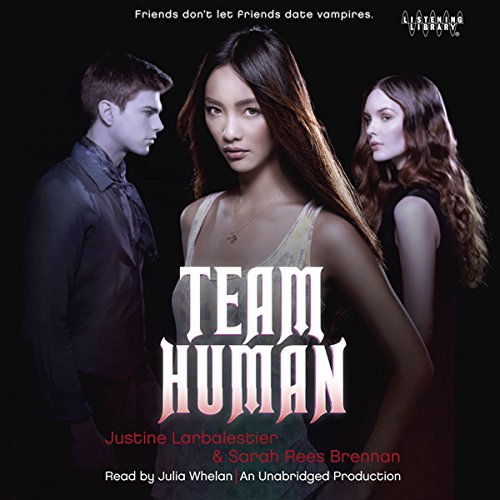 Just because Mel lives in New Whitby, a city founded by vampires, doesn't mean she knows any of the blood-drinking undead personally. They stay in their part of town; she says in hers. Until the day a vampire shows up at her high school. Worse yet, her best friend, Cathy, seems to be falling in love with him. It's up to Mel to save Cathy from a mistake she might regret for all eternity!

On top of trying to help Cathy (whether she wants it or not), Mel is investigating a mysterious disappearance for another friend and discovering the attractions of a certain vampire wannabe. Combine all this with a cranky vampire cop, a number of unlikely romantic entanglements, and the occasional zombie, and soon Mel is hip-deep in an adventure that is equal parts hilarious and touching.

Acclaimed authors Justine Larbalestier and Sarah Rees Brennan team up to create a witty and poignant story of cool vampires, warm friendships, and the changes that test the bonds of love.

I don't know why I finished this one. Usually I give up when the book is this boring but I guess there was some things that made it okay. Maybe I just wasn't in the mood for another vampire novel. I heard this one was a parody but I found little of it here. Just another teen loves/hates vamps and a very boring plot. I wouldn't recommend it even though reader was good. Sorry , not my cup of tea

Enjoyable but a bit predictable

What made the experience of listening to Team Human the most enjoyable?

To hear a "normal" reaction to vampires and zombies was fun and entertaining, though a bit overdone

No one character seemed entirely fleshed out to me, rather fragments of one another. Kit is the best, most balanced

What does Julia Whelan bring to the story that you wouldn’t experience if you just read the book?

The ending was to neat to be moving, the whole book represented viewpoints so extremely, for the most part I didn't relate to anyone to feel moved

It could of been great, the premise is interesting and the writing flows but the characters needed more shades