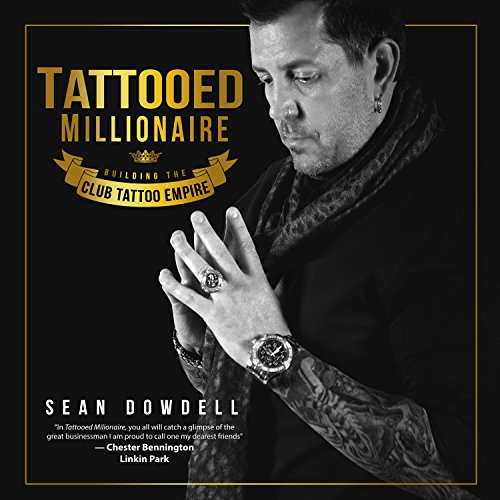 Tattooed Millionaire is a story about a young man, Sean Dowdell, who grew up in a lower middle class family in the 1970s and worked his way up through the music industry in a band called Grey Daze with Chester Bennington of Linkin Park. Eventually Sean ended up creating and building his own business in the tattoo and piercing industry, called Club Tattoo. With the help of his wife/partner Thora and partner Chester Bennington, they created one of the most successful tattoo and piercing brands in the world and became multimillionaires who give back to their communities and help other young entrepreneurs. Sean and Thora are considered among the top in the tattoo and piercing business in the world and are widely considered among the most successful entrepreneurs in their industry. They have many innovations in their field and have two patents for software and jewelry design. They have done several worldwide licensing and collaboration programs with other worldwide renowned brands and built their company into a literal empire.

What listeners say about Tattooed Millionaire

Great book I had to slow down for...

If you could sum up Tattooed Millionaire in three words, what would they be?

What was one of the most memorable moments of Tattooed Millionaire?

Sean Dowdell should have his picture under the definition of "self-made millionaire." His story was amazing from start to finish. I absolutely couldn't stop listening. His business advice is spot on and the stories about what he learned from his failures were enlightening and inspirational. Wow! This guy changed an entire industry and is still humble! Go figure. I love business books but his added stories about his relationships, especially those with his wife, Thora, and his high school friend, Chester Bennington, were touching, to say the least. I would highly recommend the read to anyone.

This book is go great! Speechless❤️!we are blessed to have you n Thora💖ty

thank you for sharing these experiences. ♡♡♡♡♡ inspired and ready for the day. thank you. Lotus Tattoo NW

If you have a tattoo or piercing studio...

If you have a tattoo or piercing studio, you should read or listen to this book. I became aware of Club Tattoo when they started following me on Instagram and when I watched the TV show Blue Collar Millionaires. I learned even more about the company in this book and got some great ideas for my own studio. Learning that Chester Bennington was involved also added to the value.

being a tattooer and shop owner since 2008 I always enjoy reading about others in the industry. great book!

Rock Badass worhty of all my admiration story

Great 21st century way of describing how to be successful at anything you put your mind into, inspirational and very touchy at some point. Great time Sr, I know we'll meet soon. Hi from Colombia btw.

A must read for any entrepreneur.

No matter what field you are pursuing greatness in this book has lessons that apply to most entrepreneurs. I particularly enjoyed learning from Sean about fear and how to overcome fear and use it as a tool and how creative entrepreneurs think. This book gave me great ideas to apply to my own business. owning a business and being an entrepreneur is not easy and it is comforting to know that successful entrepreneurs like Sean share the same struggles as a newer generation of entrepreneurs are growing.