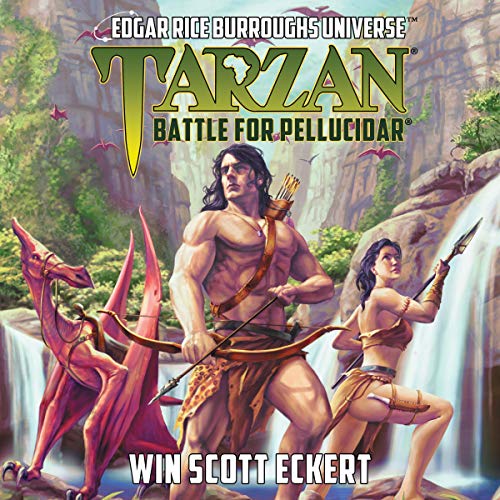 Tarzan is back in the newest novel of the groundbreaking Edgar Rice Burroughs Universe series!

Tarzan of the Apes, Jason Gridley, and the crew of the airship O-220 return to Pellucidar, the world at the Earth’s core, on a wartime mission to stop the Nazis from obtaining a powerful superweapon. But when the Lord of the Jungle’s murderous adversaries partner with the Mahars - Pellucidar’s routed reptilian overlords - and his adventurous granddaughter Suzanne goes missing on a reconnaissance mission, can Tarzan prevent the conquest and enslavement of all humanity in both the inner and outer worlds?

Also includes the bonus novelette Victory Harben: Clash on Caspak by Mike Wolfer, as the Swords of Eternity Super-Arc hurls a young scientist to the prehistoric world of The Land That Time Forgot.

The first universe of its kind.

A century before the term crossover became a buzzword in popular culture, Edgar Rice Burroughs created the first expansive, fully cohesive literary universe. Coexisting in this vast cosmos was a pantheon of immortal heroes and heroines - Tarzan of the Apes, Jane Clayton, John Carter, Dejah Thoris, Carson Napier, and David Innes being only the best known among them. In Burroughs' 80-plus novels, their epic adventures transported them to the strange and exotic worlds of Barsoom, Amtor, Pellucidar, Caspak, and Va-nah, as well as the lost civilizations of Earth and even realms beyond the farthest star. Now the Edgar Rice Burroughs Universe expands in an all-new series of canonical novels written by today's talented authors!

When an unknown force catapults inventors Jason Gridley and Victory Harben from their home in Pellucidar, separating them from each other and flinging them across space and time, they embark on a grand tour of strange, wondrous worlds. As their search for one another leads them to the realms of Amtor, Barsoom, and other worlds even more distant and outlandish, Jason and Victory will meet heroes and heroines of unparalleled courage and ability: Carson Napier, Tarzan, John Carter, and more. With the help of their intrepid allies, Jason and Victory will uncover a plot both insidious and unthinkable - one that threatens to tear apart the very fabric of the universe....

The Swords of Eternity Super-Arc comes to our universe in a series of four interconnected novels:

What listeners say about Tarzan: Battle for Pellucidar

Another crackerjack extension of the ERB universe

I have always had a soft spot in my heart for Pellucidar stories. Tarzan being thrown into the mix only adds to the fun. Put our heroes, old and new, into a World War 2 setting fighting Nazis riding dinosaurs.... beyond a simple fun listen.

Honestly, if ANY, of the above listed situations peak your interest, you need to get this book. I found myself grinning while listening to this on more than one occasion.

For those of you who may be put off by the old stories views on minorities and women, don't worry here. Those views are deftly touched upon and then modernized without it feeling forced in any way.

There is no swearing. No sex. There is nudity, but it is dealt with in a matter of fact, non-sexual way.

I highly recommend this book and series.

This book seems like it’s part of a series but it doesn’t say what should be read first. Some of the references are to events that occurred in Edgar Rice Burroughs books while others I’m unfamiliar with. One of the best things about the book is that it does capture the vibe of Edgar Rice Burroughs without the overt racism or disgusting sexism that are prominent in Burroughs books. So no women bowing to the dominating will of their “lord and master” aka their male “mate”. Thankfully the female characters are quite strong. Also missing is the assumption that white Anglo Saxons are the pinnacle of evolution or the subtle (or not so subtle) acceptance of eugenics as a given fact. I’m hose are things that have always bothered me about Burroughs books but have tried to overlook given the prevalent scientific views and institutionalized racism and sexism of his time. The book is a great story that blends the various worlds of the ERB universe. I would like to know what to read prior to this.

My title may be be a little misleading, since Tarzan doesn't need to return; he never left! The character has fallen out of pop-culture relevance lately though, and I doubt many people under 20 know him from anything beyond the Disney animated movie.

Fortunately for those of us who read books, authors like Win Scott Eckert and Mike Wolfer are still at it, creating new stories that fit seamlessly into the rich mythology Edgar Rice Burroughs created, and keeping the character interesting without losing what makes him unique.

I won't spoil anything, but the title makes it pretty clear the story takes place in Pellucidar, the famed Hollow-Earth setting Tarzan has visited in the past, a world filled with alternate-evolution animals and sentients, and a landscape that has yet to be fully explored and charted. Adventure never takes a back seat to the tediums of the real world, as both exist side by side in this novel.

If I had to pick a flaw, it would be that the story uses a number of characters that are already established from earlier stories, making it cumbersome for new readers at first. This should prove a minor inconvenience, however, as the authors do an excellent job of explaining who the characters are when it becomes important to the story, without weighing down the narrative with unnecessary exposition.

I found no fault with the narration, either. John McLain provides a dynamic reading with distinct voices for each character while keeping a pace that is easy to follow. A perfect synthesis of literary achievement and audio entertainment.