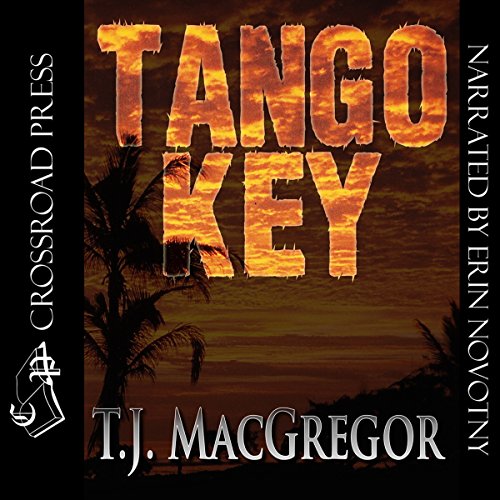 Florida's Tango Key has never been so hot. Especially now with multimillionaire and amateur archaeologist Doug Cooper turning up headless behind his beach house. It seems a number of people stand to gain from his demise, including a stunning young widow, an adulterous son, and two gold diggers from Cooper's South American exploits.

Detective Aline Scott knows a scandal like this could turn the wealthy island paradise into a no-man's land. But when she starts to sift through the facts, she unearths a startling new mystery...one that leads to a missing and priceless archaeological treasure - and the unsolved murder of Aline's closest friend three years before.

What listeners say about Tango Key

Good story but the narrator was bad.

To read yes, but not as an audio book.

By replacing the narrator. She sounded as if she was reading the book for the first time to a group of pre-school children. She had no distinguishable character voices and would often run together sentences of different speakers in a dialog. I believe most anyone could have done this performance better.

Had to turn it off, the graphic, sexual violence was too much.

In the first hour 85% of it is about the emotional issues of a narcissistic thoughts of a woman worried about her love life. Seriously, this is a supposed to be a female cop, so insecure and and more time is spent on her "needs" from a fellow cop in her love life than anything to do with the crime. The author does have a good phrase of turn and description but that's the best thing I can say about it. I suspect if you like romances you might find it interesting but even putting it on 2x I simply couldn't finish it. The best thing about it is that the narrator (at normal speed) has good inflection and reading skills. Pity she didn't have anything worth listen to read.

How to ruin a story

1. Select an awful narrator who speaks with the emphasis in all the wrong places, has little variation in voice characters, and speaks as though she has little understanding of what she's reading. There are some good sections, more toward the end, but on the whole I would say the narration was overwhelmingly poor.

2. Have an author who mistakenly thinks he's a literary genius. I had to laugh at some of the attempts at lyricism, and I can confidently state that some of his word choices do not mean what he thinks they mean.

The story and the tenses jump around between the murder mystery and a kidnapping, and I think it's actually a poor choice to have narration in books that have sections of past/present, it can be hard enough to follow in physical books and the narration has to be excellent to carry it off in audio format.

The sad thing is that there are the bones of a good story in all of this but the execution was not good.