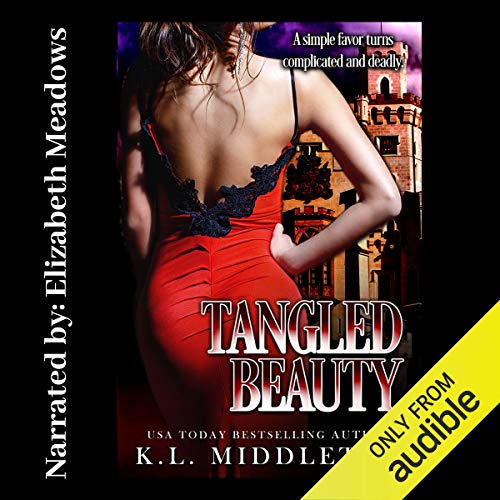 By: K.L. Middleton
Narrated by: Elizabeth Meadows
Try for $0.00

This audiobook is a steamy contemporary romance audiobook.

Sinclair Jeffries thought she knew what she was getting into when her zany, gay friend, Jesse Eddington, talked her into portraying his girlfriend during his parent's anniversary party on Huntington Beach. That is, until she met Reed, Jesse's sexy as hell older brother, and ends up getting much more than what she'd bargained for.

Reed Eddington assumed his future was settled until he met Sinclair, his brother's so-called "girlfriend," but the raw, sexual tension between them is hard to ignore. As he watches their ruse from the sidelines, he finds himself wanting to uncover more than just their amusing little facade.

What listeners say about Tangled Beauty

The story line was okay

It's a classic tale of rich guy and hard working woman. Fun yet predictable.

Very much so. I'm completely shocked this was sold on Audible. Wrong words, made up words, repeating of lines when they miss read them the first time. No editing and not professional at all. The female editor was slightly better than the male. I kept expecting them to improve but it just seemed to get worse as the book progressed. If there's a worst narration award this book would win hands down.

Could you see Tangled Beauty being made into a movie or a TV series? Who should the stars be?

Please re record with new narrators.

Easy story impossible to listen to

What would have made Tangled Beauty better?

Elizabeth meadows read this book like she is bored. The male voice mumbles and he is just monotone. It was quit painful. I read this book first and it was a quick and easy read and I rather enjoyed it. It seems like they didn't even edited the audiobook for errors.

Would you be willing to try another one of Elizabeth Meadows’s performances?

I like her series it was just the audiobook that was the let down.

The story itself is a good story. It's just the audiobook that was awful. If someone else read it, it would have been better.

Terrible, do not waste your money

What disappointed you about Tangled Beauty?

Terrible book. Unorganized and the end was a huge letdown at the end. The plot made no sense and her getting kidnapped was a part of the book that was supposed to be suspenseful and wasn't in way at all. I was not a fan and will not read or purchase any other books from KL Middleton in the future.

Would you ever listen to anything by K.L. Middleton again?

Absolutely terrible! Too much stuttering, too many pauses in the incorrect areas and there was so many times she was reading way too fast and then would slow way down.

complete disappointment. I wish I wouldnt have spent the money on it.

The other narrator in this story was even worse than Elizabeth Meadow's performance. Too much stuttering, too many pauses a

Worst Audible Narration I have ever heard

What disappointed you about Tangled Beauty?

The story was marginal but, it was like listening to a 10th grader read a book out loud that they had never read before. The male female voices were random and unappealing. However, both were equally bad at the narration. They actually seemed surprised by some of the things that were read, stumbled often and miss pronounced more than any professional should. Clearly, they were unprepared. I would demand my money back based on the narration alone.

The book was ok but, the narration was HORRIBLE!

You couldn't pay me to listen to a book from these Narrators again. I was so disappointed because I had really come to have such high quality expectations from Audible. I believed they screened for quality. Clearly not. I have listened to at least 25 books over the last 9 months and all the authors were professional. I had my favorites but, was OK with anyone one of them. UNTIL, I listened to this. Sadly, I will have buyers reservations for quite some time going forward. :(

The performance wasn't very good. It repeated lines SEVERAL times! Disjointed at times. ...The ending was predictable, and didn't tie into the overall story. Disappointed that I purchased this audiobook.

What could K.L. Middleton have done to make this a more enjoyable book for you?

Make the villain connection earlier and more cleare....more of a back story.

EVERYTHING. It was a stilted and halting performance. Appeared as if it was a practice run.

Was Tangled Beauty worth the listening time?

What Language is This?

What would have made Tangled Beauty better?

I agree with the other reviewers - the narration was horrible. I actually kept listening to it just to catch the mispronunciations and pauses in the wrong spots. It turned the book into a comedy for me. There was one hilarious part where the narrator is practically yelling some line about "quit teasing me" and then she says "I whispered". hahaha

A review of the audio. Poor quality and poor reading skills. Pronunciation was poor - reader was not engaging.

What was most disappointing about K.L. Middleton’s story?

Orator quality and that it wasn't reviewed or corrected prior to releasing audio production.

Who would you have cast as narrator instead of Elizabeth Meadows?

What character would you cut from Tangled Beauty?

I couldn't get pass the first few chapters.

I enjoy audio books and I was sadly disappointed with this production.

the book would have been much easier to enjoy if the people narrating & editing had a clue about the English language. Too many pronunciation mistakes and lags in reading sentences. The characters voices were not very believable.

I think that the story was there and I really would have enjoyed it more if they had stuck to one narrator and actually edited the narration. It is really distracting when the narrator rereads a sentence because the messed it up the first time around. Call me crazy but that is when you do a retake. Over all I feel that this was a really low budget audio book. I hope that it gets release again with different narration and EDITING.

Please if you are going to be a narrator read the book before you start recording. The story itself was good but the narration was horrible. I have been listening to books for at least 10 yrs and this narration was one of the worst by far. I felt like they were reading it out loud in class at school.