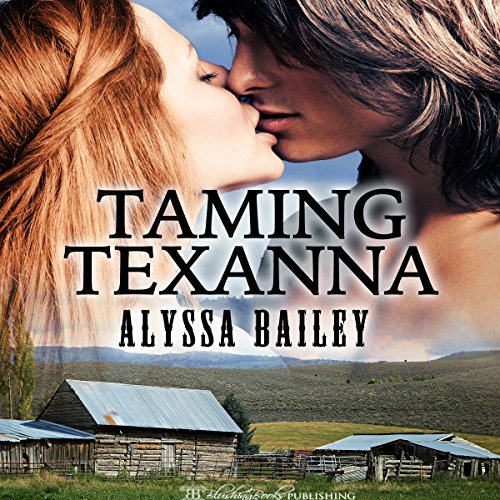 By: Alyssa Bailey
Narrated by: Brandi Benger
Try for $0.00

He needs to track her down, marry her, and take his woman home.

Nineteen year old Texanna Rae Grant is not happy, even though she knows men lust after her. She is not marriage material. Her own mother abandoned her when she was a child, and now her father wants to be rid of her, too. She doesn't know why she's so unlovable, but she obviously is. When her best friend Mandy tells her that her cousin, the marshal, has eyes for her, Texanna doesn't believe her. He wouldn't be interested in her, and even if he were, he wouldn't stay. No one ever does.

Half-breed Marshal Colton McFadden is known all over the West for his uncanny inner sense and tracking abilities. Many of the unattached women of the quickly growing township are interested in him, but he only has eyes for one woman, Texanna Grant. Colton's inner vision seems to see into her very soul, which is innocent but troubled. He knows her father would not allow him to court his daughter due to his mixed blood, marshal or not.

Then a hole in the storeroom chinking on laundry day, trousers, men's undergarments, a little coercion, and a spanking change everything. Now Mr. Grant insists on the marriage! Texanna is on the run, and Colton needs to bring order back to his house and his life. First things first, however. He needs to track her down, marry her, and take his woman home. Then he can start Taming Texanna.

Publisher's note: This book contains spanking and discipline scenes of adult women. If such material offends you, please do not purchase.

What listeners say about Taming Texanna

too explicit for my taste

almost immediately, this interesting story line is inundated with explicit, and in my opinion not very well written, sexual content that overtakes the story and seem so out of place in this era and storyline. it rates on the violence and yses.pain and sex and violence which is repulsive to me.