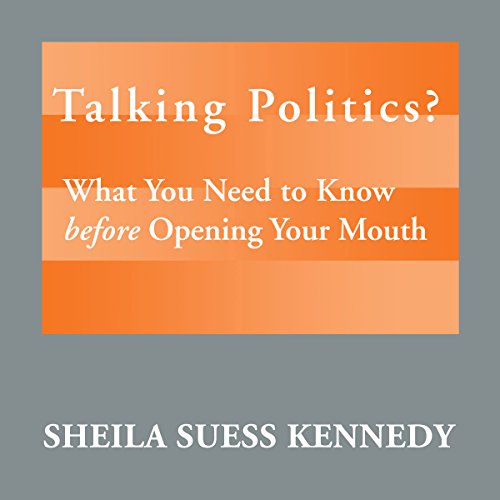 By: Sheila Suess Kennedy
Narrated by: Caroline Miller
Try for $0.00

Honest, objective, and informed political debates are all too rare in today's polarized and partisan climate. Public policy is increasingly driven by ideology while political spin, distortions, and even demonizing opponents by disseminating outright lies are routine practice from Washington to the local city council. Super-heated and hyper-partisan rhetoric, increasingly homogeneous political and ideological communities, and the public's spotty knowledge about our political system all undermine informed and considered responses to policy debates.

This audiobook identifies common areas of confusion or misunderstanding about our political system, clarifying many distortions of accepted history, constitutional law, economics, and science to help listeners distinguish documented facts from the different conclusions and interpretations that may be drawn from those facts. Sheila Suess Kennedy aims to create a more informed electorate and to better ground debates in fact, from Capitol Hill to the family dinner table. Talking Politics? What You Need to Know before Opening Your Mouth provides a solid starting point from which Americans can build more persuasive arguments for their preferred policies, whatever they may be, and will interest students of political science, civics, and history, from high school to undergraduates, and the general public interested in politics and informed discussion.

What listeners say about Talking Politics?