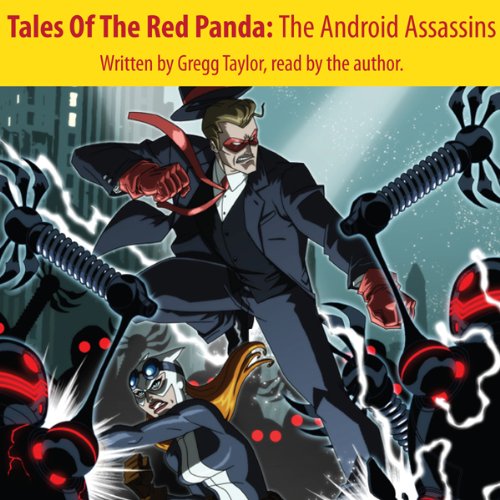 Tales of the Red Panda: The Android Assassins

A city beset by the darkness and desperation of the Depression balances upon the knife edge, ready to plunge into chaos and despair. The forces of darkness have thus far been held at bay by a pair of red-gauntleted fists, but on how many fronts can Toronto's masked champion fight at one time? An unseen manipulator is pulling the city's surviving businesses to the brink of collapse for his own fiendish purposes, just as an old foe returns to unleash his bitter fury upon innocent lives. Who will survive the power of...The Android Assassins?

What listeners say about Tales of the Red Panda: The Android Assassins

Chances are most likely that your are here because you have listened to the free episodes of The Red Panda over at Decoder Ring Theater. If so, then just get this. More of the same goodness you have come to love. Only negative is that it is read by only The Read Panda himself. One sometimes misses the voice of The Flying Squirrel. If not, then get over to Decoder Ring Theater. Listen. To all of it. Then end back here buying this anyway.

Noir Do Well Brought to Justice

Gregg brings yesterday's local superheroes back in to life beautifullly through prose, plot and performance.

Another solid installment from Gregg Taylor

This is Gregg Taylor's third Red Panda novel and sees the return of Captain Clockwork, a villain from his outstanding ongoing audio drama series, take center stage. As usual the performance that Gregg provides is a highlight. He knows these characters so well that they leap out at you as fully living entities. The action scenes were some of the best yet, with a few genuinely heart stopping moments along the way. Kit Baxter, the Red Panda's partner in crime-fighting also gets her own moment in the sun as she seeks to stem the tide of terror in the city with the help of a handful of agents after the Red Panda is taken out of the picture for a while. While still an entertaining and well produced listen I couldn't give this one more than three stars for the story. While the ending satisfies the logic of the story it felt a little too abrupt. I'm a huge fan of Gregg's work, but I almost felt there needed to be another chapter in there at the end (and perhaps a chase) to give it that four or five star rating. That said, don't be put off. It seems to me that the sign of a genuinely gifted writer is the capacity to leave the reader/listener wanting more. I definitely want more and hope Gregg sees his way clear to write another novel some time soon. In the mean time I'll be tuning in to decoder ring theatre to catch the masked marvel's latest adventures and (of course recommending these books to all my friends).

Another great adventure from Greg Taylor

Would you listen to Tales of the Red Panda: The Android Assassins again? Why?

I am a big fan of Gregg Taylor's work on Decoder Ring Theater. This audible book was like listening to one of his podcast adventures only much longer and more developed as a story. I listen to his work over and over because of the humor, twists in the plot and the characters Red Panda, Flying Squirrel, and Constable Parker.

The story had a comic book adventure feel between the two main characters, the daring duo of Red Panda, millionare guy vigilante, and the beautiful redheaded gal called Flying Squirrel. These two swashbuckling crime fighters talk with wit and humor while flirting with their attraction for each other. Action, adventure and a great plot is there anything better to listen to?

Which character – as performed by Gregg Taylor – was your favorite?

Doesn't every red-blooded woman want to be the amazing Flying Squirrel? She has a big heart for the downtrodden but can make all the bad guys shiver when they say her name. She drives fast, does martial arts and is crazy about her partner the Red Panda.

One of the characters called Tank was given a second chance to change his life. I liked the ways his character wove in and out of the story. A story of redemption within an action tale.