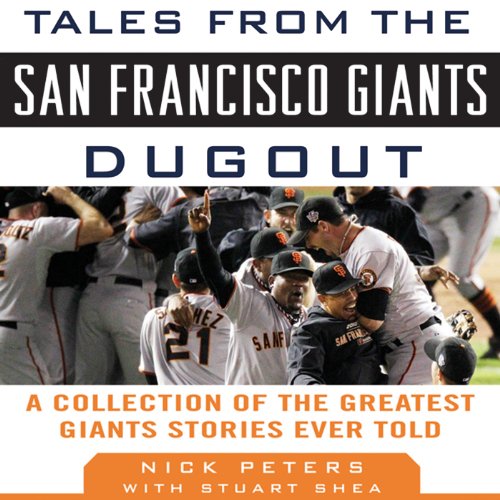 By: Nick Peters,Stuart Shea
Narrated by: Dan Lenard
Try for $0.00

This updated edition tells the best stories about the reigning World Series champions.

The rich tradition of the San Francisco Giants has provided indelible memories for their fans ever since they moved from New York’s Polo Grounds to Seals Stadium in 1958. Tales from the San Francisco Giants Dugout captures some of the humorous and poignant moments of the team’s years on the West Coast, from the intense rivalry with the Dodgers to their amazing victory in the 2010 World Series.

What listeners say about Tales from the San Francisco Giants Dugout

this is just a recitation of games, play by play of a few semi-interesting games - no juicy stories about personnel. nothing you can't find in a book of Giant's statistics.

Reader should be fired

Mispronounced so many names it was a huge distraction from an otherwise interesting read. Any Giants fan would be outraged!

Story: the first five hours seemed like unorganized snippets of random facts and stories about the Giants, which jumped back and forth across 40+ years of history. The last hour or so was finally bios of some popular players in their history, and then a more detailed description of their 2010 World Series team.
Narrator: clearly not a baseball fan and definitely unaware of the giants outside of reading this book aloud. I was ready to give him a pass on a few of the older guys pronunciations, but then we got to more recent guys and they’re completely butchered. I know that Tim Lincecum is not an easy name to say but if you’re doing this book you Gotta learn how to say Bochy, Sabean, and Lincecum among others.

Butchered too many important names.

The narrator ruined this one for me. Butchered Krukow, Uribe, Sabean (a lot), Lincecum, and Bochy. Just awful. I’m mad.

Author mispronounced so many of the players names that it hurt at times to listen to. Except for that, as a Giants fan it was good. Wish it had covered the 2012 and 2014 seasons.

The narrator clearly was not informed about how to pronounce names as many, many are said incorrectly. Also, one chapter is repeated. Good book, just was annoying to hear names of beloved people said incorrectly.