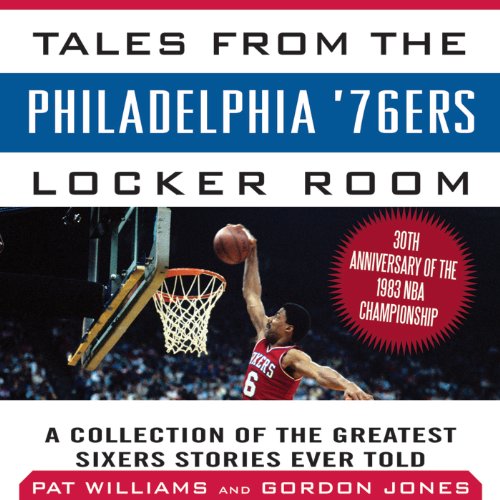 By: Pat Williams,Gordon Jones
Narrated by: Richard Allen
Try for $0.00

The 30th-anniversary edition of a collection celebrating the greatest '76ers team to hit the court - newly updated!

The Sixers won 65 games and an NBA championship in 1982-83, still one of the finest seasons in NBA history. It was Moses Malone who, in the days before the playoffs, gave the team its battle cry. Asked by coach Billy Cunningham how he thought things would go in the playoffs, Moses said, "Fo’, fo’, fo’,” - meaning, in Moses' shorthand, that he expected the Sixers to sweep each of the three series they would need to play in order to win a championship.

In this newly revised edition of Tales from the Philadelphia '76ers Locker Room, sports maverick Pat Williams teams up with writer Gordon Jones to capture a behind-the-scenes look at this legendary season. With wit and candor, Williams and Jones relive the unforgettable victories as well as the wrenching disappointments and painstaking efforts to rebuild that preceded that season.

Listeners are reintroduced to Julius "Dr. J" Erving, the beloved but unfulfilled superstar; Billy Cunningham, the hard-driven coach; Harold Katz, the relentless owner; and Moses Malone, the final piece of the title puzzle. Joined by a star-studded cast of players, they rampaged through the league, leaving a trail of devastated teams in their wake.

With a 30-year legacy that has yet to be surpassed by any '76ers team, Tales from the Philadelphia '76ers Locker Room is both a celebration of past glory and a promise of future victory to the loyal fans of the '76ers nation.

What listeners say about Tales from the Philadelphia '76ers Locker Room