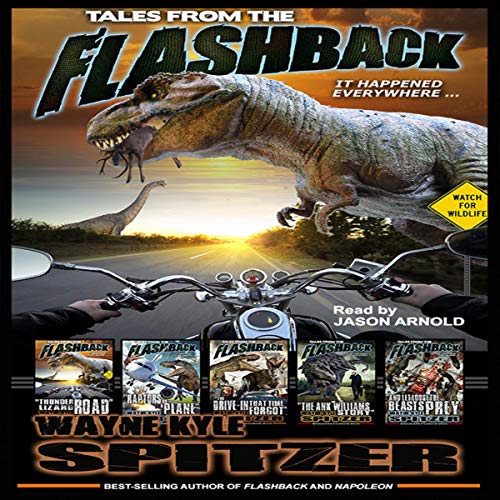 Tales from the Flashback

Tales from the Flashback

Five new tales from the Flashback, from its initial outbreak to its effects months down the road. Featuring characters and situations that will feature prominently later in the saga, Tales is both a prologue and supplement to Flashback Twilight. Essential for fans of the saga....

She couldn’t help but to think as they climbed the stairs to the top: How many times can you splash down the same stupid slide before it finally loses its appeal? I don’t know, she said to herself as Alex launched himself into the jet stream. How many times can your mother fall in love with the same type of guy?

She sat down on the slide carefully and eased herself off. The type of guy who is all presents and attention at first but then disappears like the wind? She blew down the slide, rocking between the berms alarmingly in spite of her attempt to take it slow, and had a sudden vision of a great white shark waiting for her at the bottom - its spiny-toothed maw opened wide as a manhole, its pink palate gleaming. Then she exploded out the slide and was beneath the water again - waving her arms and legs for balance desperately - and when she surfaced, fully expecting Alex to pounce upon her immediately, she was surprised to find him nowhere in sight.

And that was odd, considering she’d gone immediately after him. She scanned the water around her even as the late-afternoon sun, which had been pouring in through the windows, seemed to disappear completely. She peered outside and saw clouds stacking up in what had been a pure azure dome. Ah, she thought, it’s dipped behind a cloud. It’ll be back, unlike your long line of stepdads.

That’s when she noticed the blood beginning to spread in the water all around her...and was gripped with terror.

And such was her terror and embarrassment at starting her first period in public that she nearly fainted - but instead backed toward the edge of the pool, groping for the concrete while thinking, "How could there be so much? How could all that possibly be coming from me?"

Her fingers touched a face - Alex, of course; he’d been under the water after all - omigod, omigod, what would he say? Would he tell the others? Would it be all over school the very next day?

And that’s when she realized his head was no longer connected to his body. That it had been completely severed and was bobbing in the intake filter. And then there were screams - others as well as her own - and she turned in time to see someone yanked below the surface not 20 feet away, as well as a fin, black as an orca’s, that rolled like a log in the deep end of the pool. And she screamed until her voice went raw even as she started to climb from the water - until she saw the velociraptor crouched on the wet concrete with its eyes rolled back in its skull (Mr. Stiller said that predators did that right before striking, to protect their eyes).