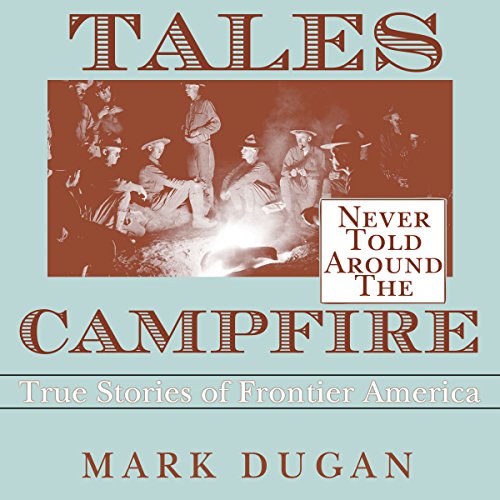 Tales Never Told Around the Campfire

Ten outlaws, ten states, ten stories of 19th-century fugitives remarkable because the events really took place. Mark Dugan's latest outlaw chase reins in enough evidence to corral the cynics. There is new information on the strange relationship between Wild Bill Hickok, his enemy and victim, David McCanles, and the beautiful Sarah Shull of North Carolina. Was Tom Horn a hired killer for the big cattlemen in the unsolved Wyoming ambush? How much do we really know about Deputy U.S. Marshall Ed Short, legendary for his gun duel with Black-Faced Charley Bryant of the Dalton Gang in Oklahoma? Or Cora Hubbard, who led a bank robbery in Missouri, then went home to Kansas to change back into a dress and bury the stolen money in her potato patch? What became of Punch Collins, black leader of a New Mexico train hold up in 1884?

What listeners say about Tales Never Told Around the Campfire

This was a fun audiobook filled with many lesser known, yet just as interesting and colorful characters from America's wild frontier. Many of whom worked the cattle drives and gambling circuits just as the famous outlaws did. Several were hard, dangerous people living in hard times when all that stopped them was frontier justice.

I think the most chilling story was about the Hill family where Alan Cash Hill and Dusky settled in Parker County Texas. They were a true family of outlaws, even having an escape tunnel under their homestead for other outlaws to stay and evade the law. Then there was Sarah Shull and David McCanles who was the first man killed by Wild Bill Hickok.

There was U.S. Marshal Ed Short from Oklahoma who was said to have feared neither man nor the devil who was in a famous gunfight with Black-Faced Charley Bryant from the Dalton Gang. Also, Punch Collins from Escondida, New Mexico and Pete Loggins from Arkansas who was a man of many trades and a murderer. From Illinois there was William Ruby and his Copperhead justice along with so many other characters with colorful histories.

There were a few chapters I listened to twice because I recognized the areas and I found it quite interesting listening to the history of the people and places that settled or passed through them. I would definitely recommend listening to this audiobook and I would even listen to it again while sitting around a campfire. It would remind me that the land I'm sitting on was most likely occupied by at least one or more of these folks from the old west. This was a great book by Mark Dugan.

Roy Lunel did a perfect job narrating this audiobook. He spoke clearly and told the stories as one would expect to hear them. I think he has a great voice for doing westerns. He made this book completely enjoyable and I hope to hear more from him in the future.

There is a reason the tales were never told

Some one who likes listening to court dockets and boring facts about nothing. The facts were hard to follow.

What character would you cut from Tales Never Told Around the Campfire?

All of them - well I can't say that because I stopped listening about half way through.

There is reason you never heard about any of these people. They weren't noteworthy. Maybe he saved the best for last I don't know.