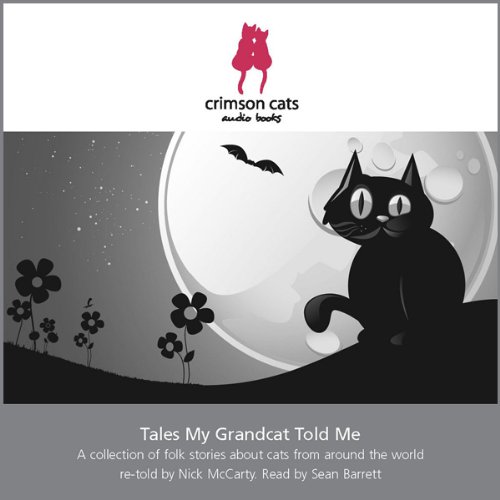 Tales My Grandcat Told Me

By: Nick McCarty
Narrated by: Sean Barrett
Try for $0.00

READER: Sean Barrett started his acting career as a boy when television drama was black and white and live. A much later TV highlight was the Father Ted Christmas Special where he played the “Priest with the Most Boring Voice”. Sean worked with Noel Coward on stage in the West End in his “Suite in Three Keys”. He was a member of the BBC Radio Drama Company and co-narrated the BBC TV documentary series “People’s Century”. His films include “War and Peace”, “Dunkirk”, “Sons and Lovers”. Sean is the reader of many audio books, winner of a Spoken Word Award (UK) 2001 and an Audie (US) 2009.WRITER: Nick McCarty has been a professional writer for forty years and has written for television shows such as Bergerac, The Onedin Line, The Six Wives of Henry V111, Z-Cars and General Hospital. In addition he has written award-winning radio drama adaptations including A Tale of Two Cities, Dan Dare, Hard Times, Dr. Jekyll and Mr. Hyde and Dracula as well as many original plays for both the BBC and Commercial Radio. He is also the author of the historical novel “Fox” which is published by Quaestor Books. The "kittens" were Maddie and Finley Byrne, Ben and Sam Emms. MUSIC: The music was created and performed by James Mair.

"You may adore kittens, but be warned: you may not cleave as closely to these strange, totally unsentimental stories about feline cunning and savagery from all over the world. Enigmatic, sinister, exotic - I loved them. The one from Japan about the boy who painted cats all over the walls of an abandoned monastery makes M. R. James about as spooky as Squirrel Nutkin." ( Sue Arnold, The Guardian)

What listeners say about Tales My Grandcat Told Me

What made the experience of listening to Tales My Grandcat Told Me the most enjoyable?

Sean Barrett's narration is amazing as usual but that's not all there is to this book. This book offers a collection of folk stories about cats from around the world. Each of these stories portrays bits of each culture's world views and morals which is very interesting in my opinion. All that said, I don't recommend this book for very young children as some of these stories can be quite scary or harsh for them.

What other book might you compare Tales My Grandcat Told Me to and why?

Tales of the Amber Sea: Fairy Tales of the Peoples of Estonia, Latvia and Lithuania. It's also a collection of folk stories about animals and people.

He has the ability to bring each character to life and narrate the stories in a calm yet captivating manner. I can listen to him for hours without getting bored.