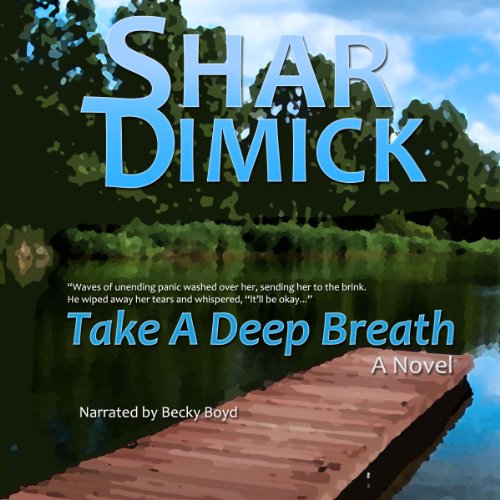 By: Shar Dimick
Narrated by: Becky Boyd
Free with a 30-day trial

Liv Reynolds can't remember when anxiety and panic didn't play havoc on her life. Recently divorced from a man who wouldn't or couldn't understand her, she retreats with her daughter to her grandmother's summer cottage on Lake of the Pines. Liv has fond memories of the summers she spent there with her grandparents. Always a safe haven, she hopes to spend the summer relaxing, healing and finding herself again.

In the midst of a panic attack, she finds herself face-to-face with Cameron Preston, the boy with whom she'd spent her childhood summers. In love with him back then, she never found the courage to tell him and they drifted apart... Her heart leaps at the second chance for love. Confusion swamps her as she tries to figure out why Cam keeps pulling away... Can Liv rekindle their old friendship and to turn it into something more?

Cam quit his busy big-city medical practice exhausted and disillusioned. He returns to his family's summer home on Lake of the Pines to regroup and determine where and what he wants to do next. When he runs into Liv, the girl he let slip away, he knows where wants to head and with whom. When Cam meets Liv's eight-year-old daughter, he assumes Liv is married. He struggles to keep his feelings for Liv in check while resuming the friendship he desperately misses. His one regret was not kissing Liv all those years ago when he had the chance... He has never stopped loving Liv. Will he let her slip away again? Not if he has his way.

Please note: This audio edition of Take a Deep Breath has been modified to exclude adult themes and content.

What listeners say about Take a Deep Breath

A better narrator - long drawn out

What could Shar Dimick have done to make this a more enjoyable book for you?

The voice was awful

What character would you cut from Take a Deep Breath?