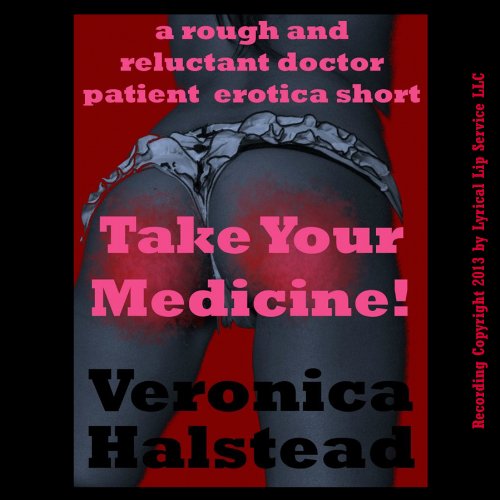 A Rough and Reluctant Doctor/Patient Sex Short (The Doctor Is In)
By: Veronica Halstead
Narrated by: Poetess Connie
Length: 15 mins
Categories: Erotica & Sexuality, Fiction
3 out of 5 stars 3.0 (1 rating)

Lena hasn't been following her doctor's instructions, and he's not happy about it. When the doctor finds out that she's been a bad girl, he decides it's about time Lena takes her medicine-whether she wants to or not! Before she knows it, her doctor is taking precautions to make sure she knows how important it is to follow doctor's orders. He's adding something to the prescription, though, starting out with a vicious spanking, ending with hard deep throat and plenty of rough sex in between!

“He leaned in and she felt herself growing uncomfortable with his closeness. ‘Okay, Lena, you don’t think you have to listen to the doctor and that somehow you’ll still get better. How does that work? With magic?’

She got angry then and pushed him a little. ‘That’s enough. I don’t need to be bullied by a doctor I pay.’

He got up then and grabbed her. ‘A doctor you hired to make you better when you were sick. I think you need to be forced to take your medicine until you can take it on your own like a big girl.’

Lena, shocked by his sudden move, began to struggle to pull back from him, forgetting that she was only dressed in the paper gown and panties. In a moment, the gown ripped and her bare breasts were pressed against his chest as he wrapped his arms around her. He smiled down at her. “You could really use a good spanking, you know that?”

She stopped struggling, stunned by his words. Then, taking advantage of her shock, he pulled her from the table and bent her over his lap as he sat on the stool. She wobbled precariously as he worked to keep her balanced on his knees and pull the remnants of the gown up off her ass. She started struggling again, but that was the moment his hand connected with her tight firm ass cheek and she froze as she felt the intense sting of it radiate from her ass to every nerve in her body. She couldn’t even yell, the pain was so sudden and such a shock.”