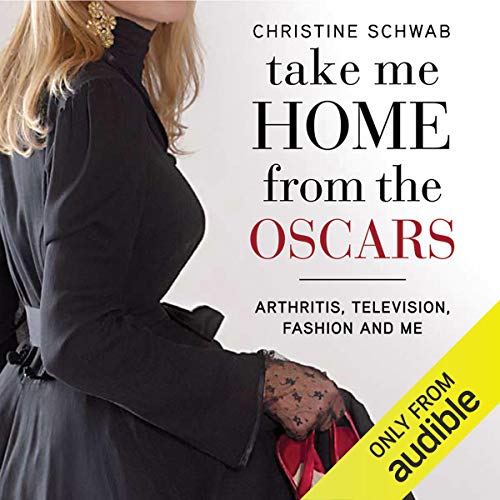 Take Me Home from the Oscars

By: Christine Schwab
Narrated by: Amanda Carlin
Try for $0.00

Christine Schwab has lived a life of Hollywood and New York glamour most people can only dream about. For 20 years she appeared as a fashion and beauty reporter on the nation's leading television shows including, Live with Regis & Kelly, Oprah!, The Today Show, Entertainment Tonight, and NBC Nightly News. She dined with celebrities, met US Presidents, attended numerous Oscars, Emmys and Golden Globes, published two books and was featured in and wrote for many of the most popular magazines while living a thrilling personal and public life married to a powerful Hollywood executive. But for most of those years, she was hiding a devastating illness that threatened to take over her entire life.

In Take Me Home from the Oscars, Schwab tells for the first time her story of living an amazing life in television while suffering from rheumatoid arthritis. Schwab recounts with incredible honesty how on the same day she produced and appeared in a major makeover segment for Live with Regis & Kelly in New York and then raced to Chicago to appear on Oprah!, all while balancing medications to ward off the relentless pain that plagued her on-camera and off. She shares an enchanted evening at the Oscars and the unpredictable arthritis pain that cut it heartbreakingly short. She re-lives being driven to deceive herself and others in a career that demands timeless beauty and youth.

Schwab kept her career alive through determination, deception, and hope. In Take Me Home from the Oscars, she takes us behind the scenes in Hollywood and New York, and behind her public persona to the 19-year journey through drug trials and treatment at the UCLA Medical Center. Listeners will root for her at every step, and cheer when she ultimately finds remission and her new life's work as a spokesperson for the National Arthritis Foundation. This is a book of hope for anyone dealing with adversity in their life.

What listeners say about Take Me Home from the Oscars

If you or someone you know has RA...a must listen

I have never watched the Oscars, am not into fashion, and don't even have cable TV, but I do have RA, and this book was just what I needed to hear. It is real, and yet offers hope and encouragement without being silly.