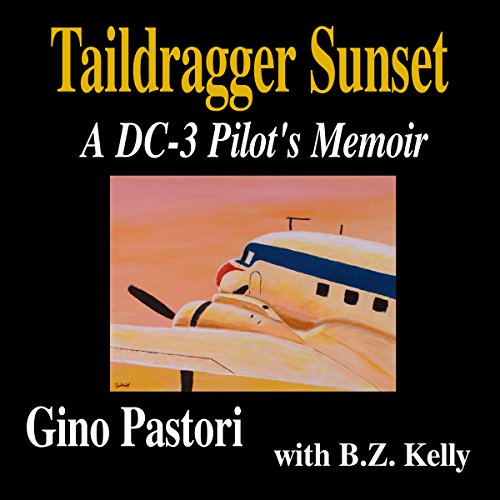 From a very young age, Gino Pastori knew he wanted to fly the iconic DC-3. He wanted to fly freight because it was flown at night. Gino shares his memories of what it took to become a commercial pilot and what it was like to live the dream. With more than 7,400 flying hours logged in DC-3s, there were many incredible flying stories. This memoir includes the most memorable stories, such as flying a plane after being temporarily blinded by a lightning strike.

Through the stories, Gino describes the skills needed to be a successful DC-3 pilot. Since the DC-3 is a taildragger, it requires unique skills during take off and landing. Care must also be taken with the radial engines to avoid damaging them. Flying freight also involved long hours and occasionally sleeping under a wing of the plane.

There are also moments of celebration like the feeling of that first ever flight at the controls of a DC-3.

This fast-paced memoir puts you in the pilot's seat of a great adventure.

What listeners say about Taildragger Sunset: A DC-3 Pilot's Memoir

Great story, fun to listen to. One day I hope to at least co-pilot a DC-3! I found this story very inspiring.

What disappointed you about Taildragger Sunset: A DC-3 Pilot's Memoir?

That the author showcased his many poor aeronautical decisions, and how great of a pilot he was to have survived them, without pointing out his errors and what he could have/should have done differently. A few examples: the particular emphasis he put on not declaring an emergency to ATC during obviously emergency situations, knowingly flying into thunderstorms, obvious chronic fatigue from incredibly long work days/weeks/months, and other unnecessarily risky maneuvers in pursuit of maintaining the delivery schedule.It's no wonder why many of the small cargo airlines of yesteryear with dismal safety records are no longer in business.

Great story about a normal kid with a pretty normal dream

Not the shinny glamorous life of a pilot but the story of someone that came up the hard way. Flew old dc3 aircraft at night in bad weather. A simple book but very injoyabke

Very interesting flow of story from start to end which kept me glued to the book. It was quite motivational to me as a young pilot to keep pursuing what I love, flying.

I'm an experienced pilot, but not in tail draggers. I aspire and am building one. I particularly appreciated the various descriptions of how the plane handled during landing, x wind and such. if you are a pilot who likes old airplanes, you'll likely enjoy this short book.

Nosedived from page one onwards.

Sorry to say I found the book rather lacking/unengaging.
I found it principally lacked direction.
A story told about a friend of the author rather than the friend telling his own story.
A potentially fascinating subject to those with an interest in aviation and engineering about a beautiful and endearing aircraft made dull and confusing by the book's bumbling style - never fully getting to grips with the subject matter.
I wanted more history, more facts, more personal accounts, more anecdotes, more impact.
Lost opportunity.