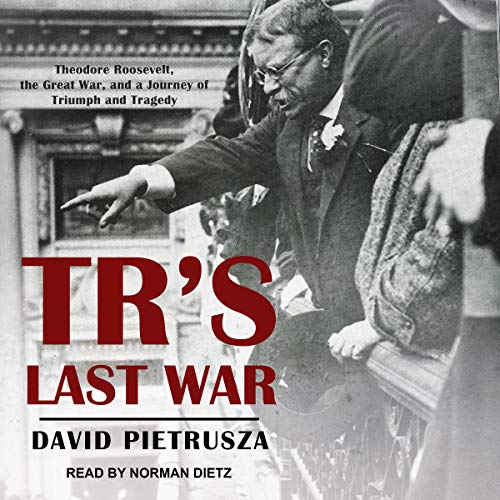 By: David Pietrusza
Narrated by: Norman Dietz
Try for $0.00

A riveting new account of Theodore Roosevelt's impassioned crusade for military preparedness as America fitfully stumbles into World War I, spectacularly punctuated by his unique tongue-lashings of the vacillating Woodrow Wilson, his rousing advocacy of a masculine, pro-Allied "Americanism", a death-defying compulsion for personal front-line combat, a gingerly rapprochement with GOP power brokers - and, yes, perhaps, even another presidential campaign.

Roosevelt is a towering Greek god of war. But Greek gods begat Greek tragedies. His own entreaties to don the uniform are rebuffed, and he remains stateside. But his four sons fight "over there" with heartbreaking consequences: two are wounded; his youngest and most loved child dies in aerial combat. Yet, though grieving and weary, TR may yet surmount everything with one monumentally odds-defying last triumph. Poised at the very brink of a final return to the White House, death stills his indomitable spirit.

In his lively, witty, blow-by-blow style, David Pietrusza captures, through the lens of the Bull Moose, the 1916 presidential campaign, America's entry into the Great War in 1917, Woodrow Wilson's presidency, and the last years of one of American history's greatest men.

I have read many books about TR over the years. In this book, Pietrusza focused approximately on the last five years of TR’s life.

The book was well written and researched. The author covers the battle between Woodrow Wilson and TR over military preparedness for the coming war. He also reviews the loss of sons TR suffered during WWI as well as those that came back wounded. The book was an interesting read.

The book is thirteen hours and nineteen minutes. Norman Dietz does a good job narrating the book. Dietz is an actor and well-known narrator of audiobooks.