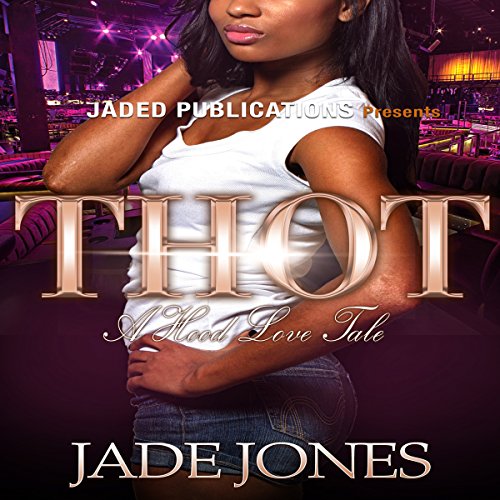 After high school ends, life begins for 17-year old Angel after falling into the clutches of a sexy, smooth-talking pimp named Jay. Instead of taking the path that leads to a bright future, she instead takes a different, much darker route.

James "Jay" Anderson not only opens Angel's eyes to a whole new world, he also introduces her to a quick and convenient way of making cold, hard cash. Floating on a dream, Angel obliges, unaware of the hidden danger that also comes with the territory.

If her new gig and love interest aren't enough, things really become complicated after she becomes romantically involved with her long-time friend, Maurice.

What listeners say about THOT

Let me start out with my gripe about the book. The narator has an awesome voice, but this is not the voice for this book. This book deserves it's justice and would have had me if the voice was a female voice. I wasn't too impressed with this book. I will say that I continued listening just to see where this book was going. Jade Jones seems like a great writer and I most definately will give her work another chance. This book wasn't anything new to me though. It's not the best book in world, and not the worse. It's a so so type book.

Angel went through a lot. It was refreshing to see her with a happy ending. I wish she had more time with her mom. I also wish her dad would have made himself known sooner. All in all a good read.

Jade does it again

loved it!!! I was so surprised how things turned out for angel. Jay was such an axx. she was too young to understand what he was doing to her. i felt bad for her but I'm glad she got her happy ending. And it was good her dad could help her when she need it the most. he showed up and looked out for without even telling her who he was.

Couldn’t get past the narrator!!!

The narrator is horrible!!! Unfortunate, because I couldn’t even get into the book and hear the real story. Sheesh!!!

The story was great but it seemed like the writer lost steam at the end. She should of been a stronger heroine. I was disappointed in the end

What would have made THOT better?

The story did not flow smoothly, It needed better transitions from one event to the next;. so the listener/reader is not confused.. I felt there were a lot of holes. The story lacked character development.

What could Jade Jones have done to make this a more enjoyable book for you?

More attention should be paid to word usage, character & story development, and continuity

The narrator has a decent voice, but was the incorrect choice for this story. While I'm glad Cee Scott did not narrate the story, a females narrator should have been chosen.

The plot had potential had it actually been developed AND been a hood love story.
This was a story of a misguided child finding her way.

The author appears to have a common theme in all of the books I have read/or listened to thus far. All the women are weak, simple and reckless. The men tend to be womanizng and abusive. Even the men who "love" the women are still the kind that "strong arm" their women.

loved the book not the ending. Thats why i only gave this book 4 stars

I just love this book it was amazing

The book was okay. I thought when Angel went back to Maurice after marrying him she would stay. But she went back to her stupid pomp Jay. I liked the book but I couldn't understand why Angel was so stupid. But it is a book. Lol

Found it hard to put down. Gripping story line that shows just how easy it can be for some to get caught up in that world.