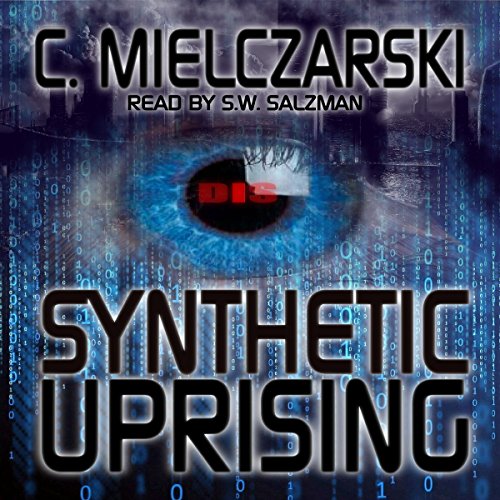 In the future, mankind has abandoned Earth to ruin. But they are not alone. Advances in artificial intelligence has allowed for the creation of synthetic humanoid life. Once meant to serve on the colony worlds as slaves, most were granted their freedom to live among the humans with the same rights and privileges. Bernie Logan, stage magician, is one such synthetic. When he loses focus once his lady love disappears his manager brings in detective Noah Carver to find her. But things are not what they seem. The stakes are quickly raised when a man Carver trails is found dead and Bernie is made the prime suspect. Soon the pair find themselves in a race against time, caught up in a much larger conspiracy which threatens not only all life on their colony, but those beyond.

What listeners say about Synthetic Uprising

The storyline was good just not spectacular. The narrator did an ok job but he was really choppy.

Narrator takes time to get used to

I received a free review copy of this audio book, at my request, and am voluntarily leaving this unbiased review.

This book is a short detective story. It has elements of sci fi and mystery and does both very well. The pacing is good, for what it is. It starts slow and progresses faster as the story unfolds and events are brought to a climax. The story rarely stops to catch its breath and instead sprints to the end.

This is fine for a short novel and a story of limited scope. Unfortunately this is a simple but complicated story, involving different players at different times and takes place in a foreign environment, in a culture unlike our own (a different planet in a time after earth).

So, with the entire writing taken up with the plot, what's lacking is any real description of society, the planet, the city, the rooms people are in, the characters, the back ground, etc. I didn't feel like I was a part of any of the story, I didn't feel as if I knew the setting, I couldn't even tell you what any of the characters looked like, save for one who was described as looking like an economics professor.

In actual fact, the plot was involved enough that this could have been turned into a fully realized 8-10 hour book, if the world and people were expanded on and realized. This would have been my preference.

The plot was enjoyable enough, if a little straight forward. Point a leads to b leads to c, etc. It was involved enough to be interesting, but not complicated enough to make for a good mystery. Having said that it wasn't convoluted or needlessly over twisty to make it tiring.

The characters are the same, not 1 dimensional but not fully realized. They are simple with obvious motivations and lack the depth of real people, however they don't feel like hollow shells going through motions unthinking.

It tool quite some time to settle into the narrator's, SW Salzman, style. His voice has a raspy quality and has a almost teacher reading material they don't know, kind of speech. It was very jarring at first, but by the end I didn't mind (still didn't like it great though). His voice range, however, was fairly good, distinct male and female voices, and good differentiation between speakers.

All in all, an alright book that could have been better if the fast pace was slowed down just a little, to make way for description and world building. The narrator takes time to get used to, but does an alright job. And the plot is straight forward but not so see through as to loose interest.

Having said that, I doubt I will continue in this series, as I like to have more world building and character development in my books.

Enjoyable story that picks up steam as the story unfolds. In fact, I'm looking forward to the next book in the series. Good performance by the narrator. I received this audiobook for free through Audiobook Boom for my unbiased review.

I received this book without obligation from the narrator.

What I enjoyed about this book was the get in late scenario, there was no messing about with this storyline and it was very easy to follow and unfolded really well. The plot revolved around some great 3d characters who each had so much depth and backstory that it affected the outcome of the book and really made you feel for them. Great job on the suspense and mystery surrounding this story. I did think maybe it could have been longer, because I enjoyed it a lot, and I hope that this isn't going to be the only book with these characters, it seems there's so much scope that it would be a shame if so. The world building and ideas in here support most A.I stories, that I've had the pleasure of reading or listening to, yet it didn't seem over-worked or contrived.

The narrator has a great tone to his voice for this genre, deep and gritty, which suited the MC and I found myself getting lost within the world. The different character voices were unique enough that I didn't need tags to know who was doing the talking, great job.

I look forward to more from both writer and narrator, thank you for letting me listen in.

One the day that his sister is ambushed and killed and Noah Carver is himself seriously wounded, the announcement is broadcast that most synthetics will be given equal rights with the human population.
Time passes. Noah buries his memories in a bottle - many bottles - but accepts a job to find the erstwhile partner of a failing magician, a Synthetic, who simply cannot hold the stage now that she has gone. He wants her back in his life again. An easy job, because Noah Carver knows exactly where to look .
An intriguing setting with it's hints of present day fears and prejudice, good character development and dialogue, and an exciting story. Complete in itself, it holds out the possibility of a continuation in a later book.

Initially, I found A.W.Salzman's narration hard to enjoy although his reading was flawless, I had difficulties relating to the cadences he employed in his reading. But this was soon forgotten as I became involved in the story and his telling of it, paced perfectly to match the text. His dialogue voicing was particularly good, each individual distinctly different.

Synthetic Uprising is a good, fast paced S.F. detective thriller spiced with conspiracy. My thanks to the rights holder for gifting me a copy of this enjoyable book, via Audiobook Boom. I will be looking out for a further continuation in the hope of more to come.

This is a fantastic story with superb narration from Shawn Salzman. Highly recommended and looking forward to more.