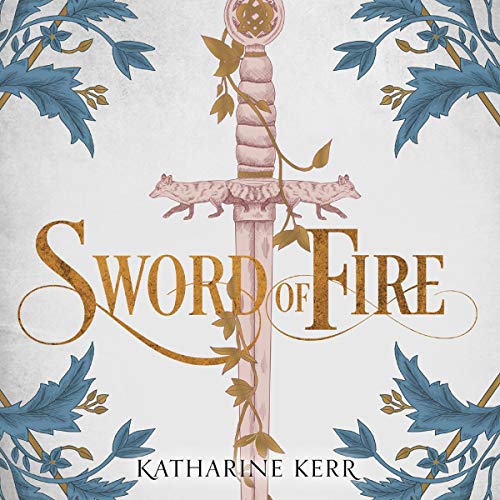 By: Katharine Kerr
Narrated by: Ruth Urquart
Try for $0.00

The celebrated Deverry series is an epic fantasy rooted in Celtic mythology that intricately interweaves human and elven history over several hundred years.

The bards are the people's voice - and their sword.

All over the kingdom of Deverry, the common people are demanding a change that will wrest power from the landed aristocracy: reform of the corrupt law courts. In the city of Aberwyn, the situation catches fire when the authorities allow the death of a bard from a hunger strike rather than hear the people’s protest.

But things haven’t always been this way.

Alyssa, a student and protégé of the bard who gave his life, discovers evidence that may overthrow the system that keeps her people downtrodden - in an ancient tome hidden far away. Though there are powerful lords who will kill anyone who threatens their privileges, and the road is full of the unknown - dragons, royalty, secrets and more -  Alyssa volunteers to make the dangerous journey and bring back the text.

A chance encounter with a rough but handsome stranger, a riot in the streets and Alyssa charges into her mission whether she’s ready or not.

The time has come to burn away injustice.

This first novel of an epic fantasy trilogy introduces new listeners to the beloved and best-selling world of Deverry while delighting fans of Kerr. A tale of uprising and empowerment that blends magic, politics and adventure in an unforgettable setting.

"Kerr is an excellent writer, her stories live and breathe - exciting, unpredictable, and engaging in equal measure." (Mark Lawrence)

"A fantastic plot which turns a simple story into something far more original...a cracking read...engrossing." (SFX)

"A criminally under-rated and overlooked epic fantasy sequence [with] a keen sense of history, well drawn characters, and a complex plot." (Kate Elliott, author of the Spiritwalker Trilogy)

What listeners say about Sword of Fire

I've read the previous books on Deverry and Westland several times and I loved them. It was a great disappointment for me when the author switched to other books - not because they were bad - after all I haven't read them - but because I was sad the story had finished.
Now I can enjoy it again - pity there's only one book for now.
But it "gladdens my heart" that the story continues.
On the negative side, it was rather slow, and not much dweomer yet - I hope it will change in the next book.

A return to form

Feels so great to be back in Deverry, and with a fresh start set some three hundred years later from the previous cycles, anyone can join in the fun. With new characters and an exciting and involving plotline, Oh and the narrator is great as well!

The story was a good premise but the narration drove me to distraction. I was further irritated by not being able to return the book online, you seem to have to ring customer services. It's rare that I don't listen to a sample, big mistake this time.

Deverry is a wonderful

Devvery is a wonderful world full of excellent characters. It's so nice to have a new story from katharine kerr

By the hairy ass of the lords of hell!