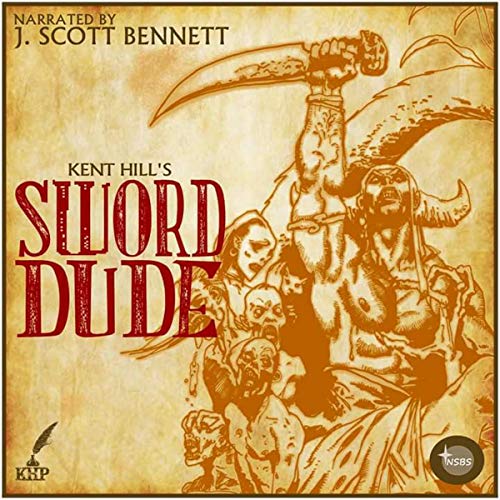 Every cheap little barbarian movie deserves a sequel. But abiding by the laws of straight-to-video sword and sorcery, the sequel doesn’t always continue the story. They’re crazier, funny, and often far removed from the mythology laid down by the film which preceded them.

So, in keeping with this formula comes Sword Dude 2. The continuing adventures of the hero also known as the Dude of Swords. He’s back, by popular demand, fighting, killing, playing it cool, and saving the girl in this phantasmagoric romp into realms fantastic.

His adventures take him to far flung stars, doing battle, bringing bad luck, constantly getting it on with an intergalactic princess and all the while preparing for a showdown with a bad guy who was only recently certified a sorcerer.

What listeners say about Sword Dude 2

Having just finished this I have to complain and say that I am very upset that I missed out on Sword Dude book ONE! Why is it not on Audible??????? Whhhhhhhhhhhhhhhhhhhhhhhhhhy!!!!!! Huh, oh, sorry. Seems like it is actually a part of this audiobook, it just follows the 2nd book. Just like Hill to put the sequel before the original story. Kind of keeps you off balance. Funny thing is, I kind of liked Sword Dude more than Sword Dude 2, but that's not saying much. It's kind of like comparing real Kobe Beef with another Kobe Beef steak. Both are delicious, succulent, and leave you wanting more even though you just gorged on two huge steaks. Book two is told first person style by one of the crudest barbarian sword weilders you will ever not meet in real life. Book One is a third person yarn that just hits home like a grand slam in Japan. Sorry, Kobe beef has me thinking Japanese for some reason.

Anyway, having just recently come off of listening to his Deathmaster "amazingpiece" I had to get this book ASAP. Hill is a madman who knows how to make crazy fun. The only other writer I can compare him to is Carlton Mellick III, who has written stuff like the Haunted Vagina and Apesh*t. Meaning these are not your normal stories, and are so full of delirium that you will feel like you have spent the day at Disney Land while high on NO2 with a fast pass. You will find yourself giggling like Joker has just hit you with his SmileX gas. What I am trying to say is that the stories are fun, engaging, humorous, and completely and creatively original.

Master narrator Scott Bennett plays his pipes like he is on a hill in Switzerland, and some sonnofagun is all out of Ricola. he is a blast to listen to, and you can always tell when he is having fun on a project because is just comes out so clearly in his voice as he speaks. This is totally one of those times. Man, I could listen to him all day, and here he is in the ZONE!

Seriously and quite sincerely, get this book and enjoy not one but 2 great stories, and then lock and load up Deathmaster for a ride you will not believe. Even though I did receive a promo code for this review it in no way influenced my considerations of the material, and in fact, inspired me to be more honest. Getting a code generally makes me harsher as a reviewer as I am more often concerned what someone like Me will decide based on my review.

I don't think I laughed so much listening to an audiobook like I did with this one. You have one crazy knight who calls himself or I should say others calls him "Sword Dude". He thinks he is all that--and so do the women--but he does have a skill with the sword and he even finds himself in another world, where he does battles with aliens! This audiobook will have you shaking your head and laughing out loud. The narrator did a great job doing this author's witty novel.

A sequel Mel brooks would be proud of

Sword dude is the essence of Conan the barbarian, death stalker, Flash Gordon and any grade z hero of the era you can think of. This sequel is just as corny as any of their sequels. Therefore it’s as great as any of them. I was voluntarily provided this free review copy audiobook by the author, narrator or publisher

The literary version of Spaceballs

I think I can safely say that this book is hilarious. Sword Dude 2 is funny in the inappropriately stupid way. It’s like the Sword Dude is some kind of Alien super hero in a world full of dumb and dumber people. It’s the literary version of Spaceballs, only with more sex and drunkenness. Makes me think of the cat with no hair that’s so ugly it’s cute; this is so stupid it’s funny.
Sword Dude 2 is another 4 star book to me.

This was interesting. Unique. It was kind of like listening to a wacky litrpg on fast-forward. It's a crazy one. If you like crazy, irreverent, just-plain-fun listens, with plenty of faceless deaths and gratuitous bodily functions, I can safely recommend this one!

This is funny fantastic audio. Second from the author. This author has a fantastic imagination that carries over in the stories. Kent brings the reader to a great place that makes them feel good
In this one the main Characters I’ll call him Seward dude , thinks he’s a gift to women with his Sward . Sward dude thinks his sword brings women fantastic all that and so do others .
His imagination is taking flight with his sword , he battles others and he always wins .
He is the best at everything and nobody will change his mind

Scott Bennett was perfect for this one and the first . His voice is deep , smooth . He does the characters perfectly

kent hill does it again

dudes, dudettes, swords, sex and bad guys what more do you want from a kent hill stroy