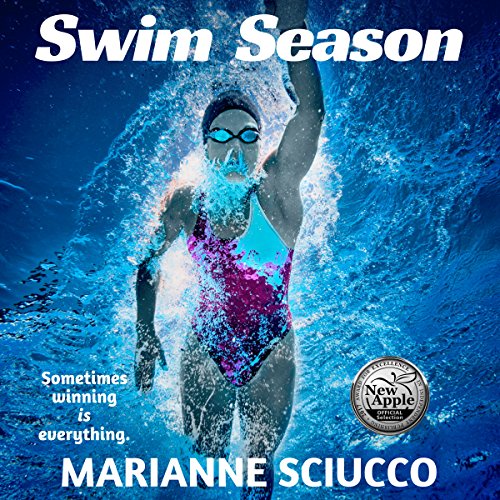 By: Marianne Sciucco
Narrated by: Evelyn Eibhlin
Try for $0.00

Sometimes winning is everything. Champion swimmer Aerin Keane is ready to give up her dreams of college swimming and a shot at the Olympics. As she starts senior year in her third high school, Aerin's determined to leave her family troubles behind and be like all the other girls at Two Rivers. She's got a new image and a new attitude. She doesn't want to win anymore. She's swimming for fun, no longer the freak who wins every race, every title, only to find herself alone. But when her desire to be just one of the girls collides with her desire to be the best Two Rivers has ever seen, will Aerin sacrifice her new friendships to break a longstanding school record that comes with a $50,000 scholarship?

What listeners say about Swim Season

A swimmer's work is never done

Swim Season, by Marianne Sciucco, is an engaging coming of age story centered around teen girls and their swim team. Lots of tension with wondering how the various swim meets and other situations will turn out. The author does an expert job of writing as she touches on the difficult subjects of bullying, drug abuse and the effects of divorce on children. I listened to the audio version of the book and Evelyn Eibhlin did a great job of narration, giving voice to the characters with good inflection and emotion, which made for an enjoyable listening experience. I was given a complimentary copy of the book with no expectation of a positive review. The opinions are my own.

I was pretty sure from the first chapter that this listen was going to result in the main character, Aerin, winning the coveted race and getting the coveted prize. Check. The fact that the story centered around a swim team, of which I have some knowledge, made this a welcome listen though, albeit predictable.

I loved the narrator. This is a YA listen but though youthful, this narrator never succumbed to pitched shrieks or any such short cuts to portray teens. For that I am grateful.

There was some family drama here and quite frankly, many of the adults spent too much time behaving badly. The kids survived though.

This was a bit long to be a "light summer read" but if you have an interest in high school swimming, well, jump in.

Summary: There's drama in and out of the pool for the Two Rivers's high school girls swim team. Aerin Keane's been on a ton of teams in the last few years, but she's spending her senior year living with friends of her mother so she doesn't have to live with her father and his new family. She's the outsider who just wants to fit in. Meanwhile, there's a high-stakes challenge with a $50K scholarship on the line ...

Additional Comments:
- I'm not sure about some of the details concerning school attendance and sports laws. Most public and private high schools have some sort of anti-recruiting rules in place. Meaning, I'm not sure Aerin would have legally been allowed to join the Two Rivers high school team. I'm not even sure how she would attend the school, though there might have been an exception given her family situation. (Doubtful because she could have lived with her father.)
- Another nitpicky point - quizzes do not get taken and graded in a day if they're on paper. They &quot;might&quot; get graded instantly if they're on the computer, but if somebody's got to handle paper, there's about a .0001% chance of that paper getting graded same day. Trust me. I'm a high school chem teacher. Also, why does Mel's twin brother drive and she doesn't?
- Length 4/5: It's long. Very long. Probably could have been slimmed down by 200 pages and been fine.
- I HIGHLY recommend the audiobook version because then the length doesn't mean much, somebody's reading the story to you. The narrator's very believable and gave a solid performance.
- Main Character 4.5/5: The main character's likeable for most of the book. The first third or so she annoyed me, but you knew she'd come around.
- Side Characters 4.5/5: Erica (sorry about spelling if that's wrong; friend), Mel (new best friend), Tatiana (rival), and Jordan (mean girl) are a tad cliche, but high schools tend to have them, so in that sense it's realistic. I really liked Aerin's background. It might be cliche, but it works very well.
- Plot 4/5: While one could probably predict the outcome if you've read enough of these sorts of books, it's still satisfying. The Allison Singer Challenge is kind of cool. I liked how the whole community really got into the swim team's season. That sort of fervor's usually saved for football in most towns.
- Swim details 4/5: In audio form, following the competition times got a tad difficult.
- Themes 5/5: I loved that the book contained a bunch of YA themes: fitting in, dealing with bullies, finding yourself, discovering your potential, pushing yourself, pressing on, the flightiness of popularity, etc.

Conclusion: Swim season delivers an enjoyable high school sports drama.
*I received a free copy of the audiobook. I freely chose to review it.*

Great book for the swimmer in your house

This book caught my eye because as a previous member of my high school swim team it brought back the good old days and memories of 500 yard warm-ups, endless relays and then a 500 yard cool down.....then you started practice lol. Seriously, great book and well researched. If your tween/teenager is in a sport this is a good book to show them they're not alone and everyone has similar challenges in school and sports (life,love, parents, school sports etc)
The only thing I thought could be better is the narration lacked the emotion of other speakers, but not bad at all. It's a good book for the younger student/athlete in your house and would highly recommend it.
"I was given this free review copy audiobook at my request and have voluntarily left this review."

This was a brilliant read. Not my thing but I highly recommend this book.
The storyline is amazing.
The narrator is good.
❤️🥰😂

I really wasn't expecting to enjoy this Young Adult book about competitive high school swimming as much as I did, but it grabbed me right from the start and didn't let up for 590 pages (or more accurately, 14hrs 43mins of Audible listening). The narrator, Evelyn Eibhlin, was brilliant and the issues covered by the book were deeper than just competitive swimming.

Aerin Keane is starting her third high school and has signed up for the swim team. In her previous schools she was a prize-winning swimmer and she knows the pressures that involves. She decides to swim for release of tension only and not to let on that she is any more than a mediocre swimmer, just good enough to ensure a place in the team.
It's a friendly team with a great team spirit and for the first time she begins to feel accepted and to have real friends.
She keeps her family life to herself and gives away little when she is asked why she's living in a new town with her 'Aunt' Maggie.
As the competition intensifies, the truth about Aerin's situation begins to reveal itself and not everyone takes it well.

I really enjoyed the way this novel built the tension around Aerin's story and how she reacted to the inevitable bullying and eventually rose to the ultimate challenge.
The characters were excellently drawn and even though there were a good number of them, I didn't lose track at all.

For anyone who knows any competitive swimmers, this is a must-read, for the rest of us, well, it's a must-read too!
I don't suppose the author would consider a sequel?