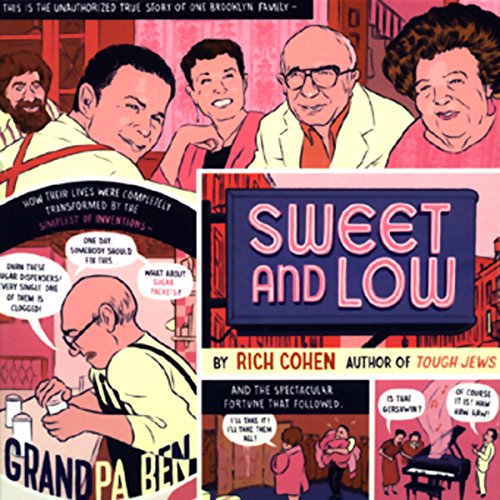 Sweet and Low is the amazing, bittersweet, hilarious story of an American family and its patriarch, a short-order cook named Ben Eisenstadt who, in the years after World War II, invented the sugar packet and Sweet'N Low, converting his Brooklyn cafeteria into a factory and amassing the great fortune that would destroy his family.

It is also the story of immigrants to the New World, sugar, saccharine, obesity, and the health and diet craze, played out across countries and generations but also within the life of a single family, as the fortune and the factory passed from generation to generation. The author, Rich Cohen, a grandson (disinherited, and thus set free, along with his mother and siblings), has sought the truth of this rancorous, colorful history, mining thousands of pages of court documents accumulated in the long and sometimes corrupt life of the factory, and conducting interviews with members of his extended family. Along the way, the 40-year family battle over the fortune moves into its titanic phase, with the money and legacy up for grabs. Sweet and Low is the story of this struggle, a strange comic farce of machinations and double dealings, and of an extraordinary family and its fight for the American dream.

"A wealth of family history in this funny, angry, digressive memoir." (Publishers Weekly)

What listeners say about Sweet and Low

If you could sum up Sweet and Low in three words, what would they be?

This book presents a smart, clear-eyed look at the complex dynamics surrounding family, food and money. It's also an interesting historical look at Brooklyn, 20th century Jews, and the evolution of the dieting industry. I liked the passion that the author put into reading his story.

I was so looking forward to this story, but have been quite disappointed. The author goes off on so many tangents which ultimately don't add to the story. It feels like he had enough material for a really great investigative piece in a magazine or newspaper, but padded it out to book length. Also, the author's biases, while natural,are all too evident and therefore, distracting. Just okay.

Journalist Rich Cohen writes and narrates the story of his family, the creators and longtime operators of the Sweet and Low brand of artificial sweeteners. In particular, Cohen is the son of the one member of the family that was disinherited from the multi-million fortune amassed through the family business.

The term white privilege was not in common use in 2006 when Cohen published this memoir. But in today's climate, what we have here is a case study in white privilege. A successful journalist, son of a successful businessman who wrote the huge best selling book You Can Negotiate Anything, whines about his mother missing out on his grandparent's saccharin fortune -- and none of his relatives, of which there are many, are any better, especially his Uncle Marvelous, who while running Sweet and Low pled guilty to felonies revolving around illegal payments to then-Senator Al D'Amato.

The best part of the multi-layered story for me was the history of sugar and artificial sweeteners. Other aspects of the story -- the family disputes and corruption scandal, fell flat. Hard to take all that white privilege and the wealthy family members living such sour lives despite their privilege. But the writing and the author's own narration are peppy enough to maintain an enjoyable pace.

One of two books I finished on audible, loved the true story and family history setting this puts you in. I can relate to all his family members mentioned.

The family saga of the Cohen’s and the Eisenstadt’s who built the Sweet and Low empire from the ground up. Lots of family drama including minor ties to organized crime, lawsuits, disinheriting, and more. Read by the author. An interesting story but very rambling. The author went off on many tangents and the history of artificial sweeteners was buried in the final third.

My most enjoyable listen so far. Humorous, interesting and well paced. The reading by the author enhances the experience. Well worth it for fans of history, dysfunctional family stories and memoirs alike

I found the narration to be monotone and stilted so I could not get past the first thirty minutes. But even with those minutes, I wasn't convinced that I should care about this fmaily.