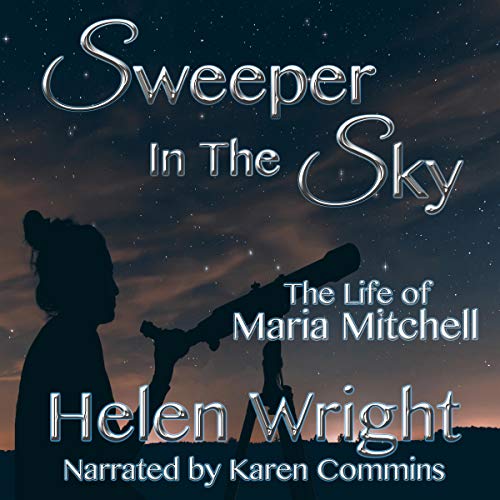 Sweeper in the Sky: The Life of Maria Mitchell

By: Helen Wright
Narrated by: Karen Commins
Try for $0.00

Long before the world began seeking STEM - science, technology, engineering, and mathematics - education for girls, American Maria Mitchell proved that women were capable of achieving worldwide acclaim for brilliant reasoning and discoveries. Born to a Quaker family in 1818 Nantucket, Mitchell had opportunities unavailable to other girls of the time. The Quakers believed boys and girls should be educated, so Maria attended public schools. She also had the benefit of her father's tutelage. At an early age, she loved to perform the complex navigational computations requested by sailors.

At the age of 29, Mitchell discovered a comet and earned a gold medal from the King of Denmark, the first of many international awards and honors in her illustrious life. She was one of the first women elected to the American Academy of Arts and Sciences and later became the first Professor of Astronomy at the newly-built Vassar College. Throughout her long teaching career, she urged her students to question everything. If a man could achieve success at a venture, so could a woman.

Forthright and rebellious by nature, Mitchell was beloved by her students. She was a strong proponent of women's rights, traveled widely in the US and Europe, and met with other notable scientists of the time.

This audiobook was produced to celebrate the 200th anniversary of Maria Mitchell's birth and bring her legacy to a new generation.

"We especially need imagination in science. It is not all mathematics nor all logic, it is somewhat beauty and poetry." (Maria Mitchell)

What listeners say about Sweeper in the Sky: The Life of Maria Mitchell