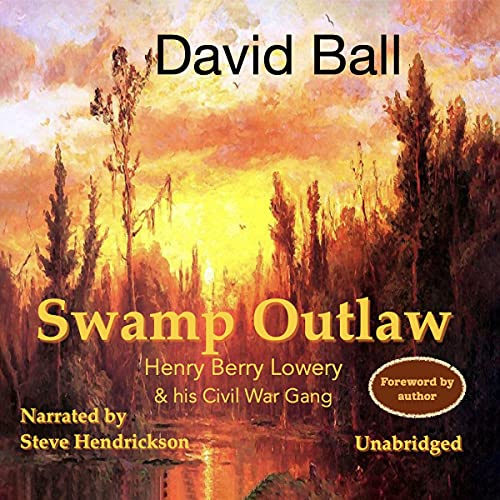 By: David Ball
Narrated by: Steve Hendrickson
Try for $0.00

The South had lost the Civil War and was losing its soul. Uniformed rebels who had fought honorably in the light of day now wore tattered sheets in the dark and burned crosses. In armed packs, they dragged the helpless Negro or Indian from his bed and stopped his hurried prayers with noose or buckshot. In North Carolina’s Robeson county, the Ku Klux did not see the vengeance it was stirring up: Henry Berry Lowery’s gang of Swamp Outlaws, who ruthlessly protected themselves and the county’s Indians and Negroes. “We kill anyone who hunts us, from Sheriff on down,” Lowery promised, and by forays out of the swamps to keep that promise he became the highest-bountied outlaw in the nation’s history. This tale of bloody revenge and brilliant survival is drawn from the gang’s real victims, benefactors, and descendants - all as told by the Yankee reporter from the New York Herald who joined the gang to get the story.

What listeners say about Swamp Outlaw