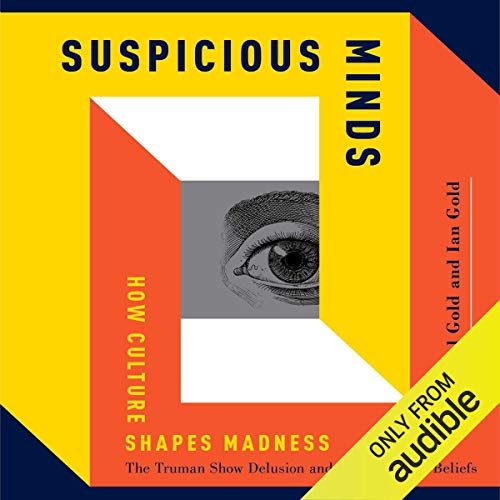 Combining extraordinary true stories with the latest research, Joel and Ian Gold take us on a wild journey through the delusional brain to explore the intersection of neuroscience, biology, and culture.

Mr. A. was admitted to Dr. Joel Gold’s inpatient unit at Bellevue Hospital in 2002. He was, he said, being filmed constantly, and his life was being broadcast around the world "like The Truman Show" - the 1998 film depicting a man who is unknowingly living out his life as the star of a popular soap opera. Over the next few years, Gold saw a number of patients suffering from what he and his brother, Dr. Ian Gold, began calling the "Truman Show Delusion," launching them on a quest to understand the nature of this particular phenomenon, of delusions more generally, and the nature of madness itself.

The current view of delusions is that they are the result of biology gone awry, of neurons in the brain misfiring. In contrast, the Golds argue, delusions are in fact the result of the interaction between the brain and the social world. By exploring the major categories of delusion via fascinating case studies and marshaling the latest research in schizophrenia, the brothers reveal the role of culture and the social world in the development of psychosis, notably delusions. The result is a groundbreaking new direction for thinking about the interaction of the brain and the world around us.

Sure to appeal to those who admire the work of Oliver Sacks, Steven Pinker, and Antonio Damasio, Suspicious Minds presents a fascinating study about just how dramatically our surroundings can influence our brains.

What listeners say about Suspicious Minds

This is a very interesting book in many parts, but I am not sure everyone will appreciate the detailed accounts of medical case histories. For me the latter was the book's weakness. However, if you fast-forward the case histories and cut to the chase, the theories of persecution, the evolutionary approach, the connections with modern (urban) life — all these elements make for insightful listening. I am going through it a second time around and discovering many things that I missed. I recommend this book.

Interesting, even for the layman

the golds work toes the line between that of the psychological world and that of an ordinary, curious reader. concepts are explained in a myriad of interesting ways to help get the point across, followed by examples directly from a person's story.

I learned a lot about brain function, psychology, mental illness, and how external forces influence all of the above in an engaging, fascinating way.

The personal stories were interesting, but this read like a textbook of current research into what causes suspicion and stuff in the brain. Interesting information, but very very dry. And the reader was super dull. They should have hired a voice actor.

I was not sure what to expect as I selected this book randomly, but it was very intriguing and leaves me with questions and something fun to research.

While the subject matter is fascinating, I was not as captivated as I was by other books on the brain and related mental issues. I would like to have read an entire book on the suspicious mind by Oliver Sacks. I will keep searching for something like this, only less dry.

I stopped listening to the audio version about 2 chapters in and ordered the book so I can read it myself because the narrator for the audio book is just awful. Not only is his voice dull, but his intonation is totally off and I didn't want that to ruin what seems to be a great reading experience.

Thoroughly enjoyed this book a good overview of delusions and psychiatric history in this area and brings in the human, systemic and dynamic elements and understanding really enjoyed this.